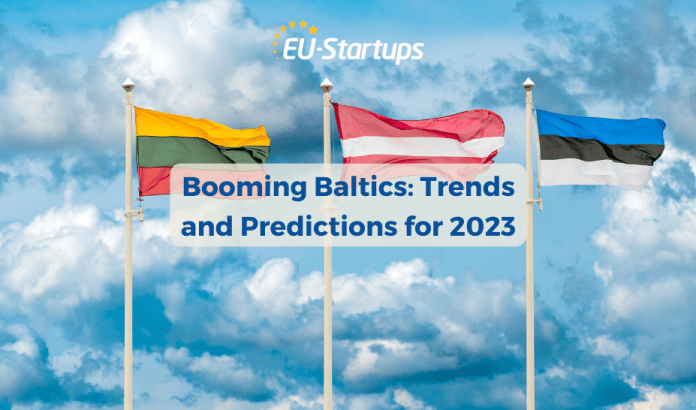 The Baltics are a small but mighty region when it comes to startups. It’s a region that is home to some of Europe’s biggest startups and scale-ups – Bolt, Vinted, Printful and Skype all have roots here – and hubs such as Tallinn, Vilnius and Riga have really thrived in recent years. The area is certainly making itself a force to be reckoned with and is bolstering Europe’s wider entrepreneurial community.

According to AIN.Capital, 2022 saw over 124 deals and startups in Lithuania, Latvia and Estonia attracted over €1.6 billion in investment this year. It’s also been the year when micromobility superstar Bolt has consolidated its position in the market, and Nord Security, Glia and Veriff all joined the unicorn club.

The success of the startup scene in the Baltics can’t really be overestimated. A few years ago, the ecosystem was still in its infancy and with a population of 6.195 million, the region really is punching above its weight.

We caught up with Jonė Vaitulevičiūtė, managing partner at FIRSTPICK, an early stage venture capital fund based in Vilnius, Lithuania, to find out more about the Baltics – how the region has developed into a startup hub and what’s to come for the years ahead.

Why are the Baltics such fertile grounds for startups?

In such condensed ecosystems where you can easily meet up with fellow founders and VCs or just bump into them, experience sharing and support to each other are on another level. We also have a vast number of professionals leaving corporates or mature startups and starting their own. Lastly, coming from a small market, founders immediately focus on international scaling and have outside-looking thinking, thus wasting no time on the local market.

What lessons can the Baltics teach the rest of Europe?

We have a very well-working associations ecosystem – angel associations are one of the strongest in Europe (e.g. LitBan was named the fastest-growing EBAN member), and venture capital associations are doing a great job facilitating Tier-1 fund attraction to the Baltics. We also have a new type of association forming, e.g. Unicorns Lithuania, which unites startup founders and works towards a better legal base for them. I would suggest any other European country to meet with them and hear firsthand how they are running it.

Which market areas are the Baltics particularly strong in?

SaaS and Fintech have been historically strong due to existing expertise in the market. But we see more and more marketplace business models popping up, which is the aftermath of the maturity of our unicorn startups, knowledge sharing and active unicorn founders investing in startups.

Which areas do you see growing most in 2023?

Vertical fintechs, marketplaces that heavily rely on logistics and distribution, wellness & femtech — are some of the areas we see having good momentum.

What challenges will 2023 bring? And which opportunities?

Being near a geopolitically distracted region brings somewhat of a challenge in getting Tier-1 funds to invest in local startups, which may limit Baltic startups’ chances to raise rounds of Series A and later. On the other hand, there is sufficient capital for the early stage in the market and we hope to see a new pipeline being brewed for Pre-Seed and Seed stages.

How can the ecosystem grow over the next year? What do players within the wider ecosystem need to do?

Successful startups are, of course, the most important indicator of a thriving ecosystem. We need to prove that we – the ecosystem – know how to grow unicorns at large rather than rely on occasional successes. For that, the funds need to keep bringing Tier-1 funds to the region, associations to work on the legal base for startups, and market players to constantly interact with the government. Seems that we are on a good track with this.

Share
Facebook
Twitter
WhatsApp
Linkedin
Previous article
Compact overview of the most common legal entities for companies in all EU member states
Next article
Towards a new future of commerce that is circular, sustainable and pre-loved | Interview with the founder & CEO of Faircado