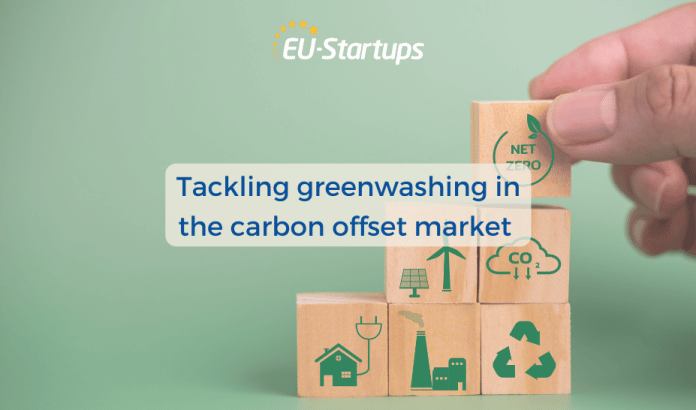 Since COP27, talk about decarbonization has become more widespread and it’s a pretty hot topic. It’s something we expect to continue over the next year, especially as the widened scope of the Corporate Sustainability Reporting Directive (CSRD) means that nearly 50k businesses in Europe will need to report on their greenhouse gas emissions.

This reporting needs to be done reliably and accurately – and this is becoming a key concern as reports of greenwashing ramp up.

Greenwashing, the practice of making an unsubstantiated or misleading claim about the environmental benefits of a product, service, technology or company, has become pretty widespread as sustainability has grown in importance and it’s something we need to be very proactive in tackling. Greenwashing is used to promote a false sense of environmental responsibility in order to gain a competitive advantage or to sell more products. It can lead to complacency and inaction on real environmental problems.

A prime example of greenwashing was published by a Guardian investigation this year, where the reporters revealed that ​​oil and gas companies, including several with net zero pledges, were still planning vast new developments that would push the world well beyond the goals of the landmark 2015 Paris agreement.

Carbon offsetting became one of the hot topics in sustainability this year. It refers to a process that involves a reduction in, or removal of, carbon dioxide or other greenhouse gas emissions from the atmosphere in order to compensate for emissions made elsewhere. Many European startups have popped up this year, boasting the ability to help companies offset carbon emissions through things like the Voluntary Carbon Market, planting trees and so forth.

In general carbon offsets can be grouped into two categories, avoidance/reduction and removal/sequestration. Carbon offsets are often used as a way to reduce the net emissions of a person, business or event. When one company removes a unit of carbon from the atmosphere as part of their normal business activity, they can generate a carbon offset. Other companies can then purchase that carbon offset to reduce their own carbon footprint. These are reductions in emissions that would not have otherwise occurred without the financial incentive provided by the buyer of the carbon offset.

However, one needs to keep in mind that according to calculations by the Bavarian State Forestry Institute, a 23-meter-high beech tree with a diameter of 30 centimetres has stored about one ton of CO2 in its lifetime. By comparison, a human being in Europe causes in average about nine tons of CO2 emissions in a year. So, according to this calculation, to neutralize the average carbon dioxide emissions caused by a European citizen in one year would require the lifetime output of nine giant beech trees. Carbon offsetting by planting trees might just be a little too good to be true.

In any case, carbon offset initiatives – such as planting a tree – should only be considered as a last resort as the “high-level UN expert group” pointed out in March.

Bringing trust to the space

It’s clear to see that the carbon offsetting space needs more trust and more transparency. Carbon offsetting is a positive step forward on the road to net zero, and it has the potential to make a strong influence, but, we need to be cautious in how we approach it.

Here, we look at 5 European startups taking on greenwashing in the carbon offsetting space:

MAGNOTHERM: Even better than the removal of CO2 from the atmosphere is the avoidance of greenhouse gases in the first place. Almost no one knows that modern refrigerators usually use a refrigerant called Tetrafluoroethane (HFC) with a global-warming potential (GWP) of over 1000 % higher compared to the same mass of CO2. So even if a refrigerator is labelled as eco-friendly, the end-of-life GWP is never considered in these claims. MAGNOTHERM tackles those greenwashing claims by offering highly efficient cooling as well as heating solutions. Launched in 2019, the technology, based on solid-state materials and water, is capable of revolutionizing the way we provide temperatures. Based in Darmstadt, Germany, MAGNOTHERM won the EIC Accelerator with a €2.5 million grant and a potential co-investment of €4 million in a future Series A financing round.

Climatiq: Open access and scientifically vetted emission factors are another way to bring credibility to the topic of CO2 emissions. A fully transparent dataset of up-to-date and verified emission factors is available through Climatiq’s data explorer and allows integration into third-party solutions. The provided data points are enriched with additional metadata including quality flags, LCA methodology, GHG Protocol Scope, and link to original sources for full transparency. Founded in 2021, Climatiq leverages a team of climate data scientists in combination with a scientific advisory board to prevent greenwashing in the first place. All of that has convinced investors to chip in €2 million in a seed round for this Berlin-based startup.

Sylvera: Through a comprehensive and independent analysis of carbon offset projects, Sylvera brings another dimension of quality into the emission reduction market. With their carbon intelligence platform, Sylvera delivers comprehensive and accessible carbon ratings and insights. Each rating is derived from the holistic analysis of a project’s carbon performance, additionality and permanence. Sylvera ratings are indications of the likelihood that the claimed carbon impact of a project is a true representation of its real impact. As Sylvera does not sell carbon credits or get paid by developers to rate projects, they can provide independent and unbiased ratings. With total funding of €38.4 million from 12 investors they have a strong base to diffuse into the market. The London-based team is growing incredibly fast, now counting over 140 employees since its 2020 launch.

Carbon Minds: Life Cycle Assessment (LCA) is a powerful tool to determine the environmental impacts of products and services. This Assessment relies heavily on stringent data quality to ensure the integrity of the database. For Cologne-based Carbon Minds, this means that professionals have checked every single dataset and that the underlying methodology has been independently reviewed and certified by TÜV Rheinland. This annual certification process is in-depth, and the full certification report (not just a summary) is publicly available. In addition, Carbon Minds’ services are now used by many users in industry and research. This means that a certain “community review” is taking place at the same time. Recently, Carbon Minds partnered with BASF to provide consistent chemical carbon footprint data in alignment with BASF standards.

Rockfarm: The mineralization of CO2, so basically converting CO2 into rocks, is an approved method to permanently remove carbon from the atmosphere. RockFarms’ carbon removal solution is based on sparkling water and volcanic rock powder and allows decentralized and permanent CO2 removal. Instead of using remote areas, RockFarm encourages carbon removal directly on the ground for their customers. Founded in Germany in 2020, RockFarm has started a carbon offsets certification process and is currently negotiating with several providers. In its pilot phase, RockFarm CO2 wall system is combined with biogas plant to test the system stationary for the first time. In addition, RockFarm will start a Series A round next year and is currently supported by EIT Climate-KIC.

Thomas Homburg
Thomas studied Chemistry in Northern Europe, and he worked as a researcher in Canada, Israel, and the UK. Nowadays, he is working as an innovation manager in the area of sustainable chemistry, supporting international start-ups. He is interested in the interplay of research, entrepreneurship, and regulation and is convinced that the transition towards a sustainable future lies in multidisciplinary approaches.
RELATED ARTICLES
Funding