EIT Health InnoStars Awards 2022: Meet the winners who are shaping the future of European health 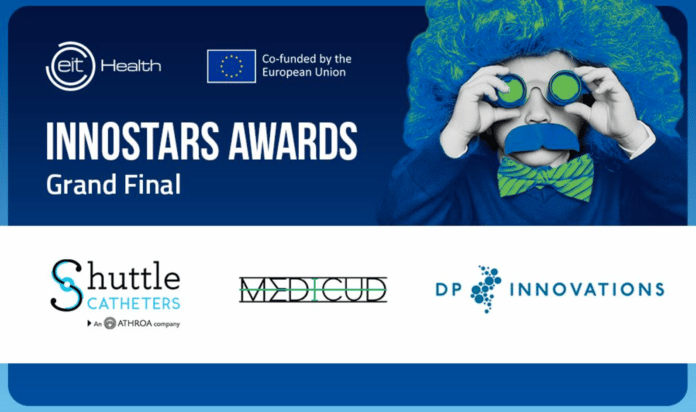 In a showcase of the finest healthcare innovations in Central, Eastern and Southern Europe, promising startups took to the stage on 24 November for the EIT Health InnoStars Awards Grand Final. InnoStars Awards, Europe’s leading healthtech accelerator programme has now identified startups that have the chance to shape the future of healthcare innovation.

Innovation in healthcare is something which impacts each and every one of us. From solutions helping to relieve pressure on healthcare systems and innovations empowering greater autonomy over personal health to new medical devices and beyond, healthtech is a very exciting space in Europe’s startup ecosystem right now.

On November 24th, promising healthtech startups, investors, healthcare providers and prominent players in this space from across Europe gathered for the  Grand Final. It was an exciting culmination of this year’s programmes and a chance for attendees to hear from the top healthtech teams in Central-Eastern and Southern Europe and enjoy matchmaking and networking possibilities.

InnoStars Awards is one of the main EIT Health accelerator programmes for early-stage healthcare startups from Central, Eastern or Southern Europe. From more than 100 teams, 10 exceptional ventures were selected to compete at this final event.

Now in its 6th year, the event presented a broad portfolio of startups from RIS Innovation Call teams that are at the beginning of their journey, as well as from Attract to Invest teams that are fully operational with a portfolio of clients. The 32 teams that took the stage all had the chance to compete for a special Public Award, and Media Award as well as the InnoStars Awards.

In June, the 20 best teams of InnoStars Awards programme received €25k of smart money investment, personalised acceleration and mentoring, as well as access to two bootcamps, where they had the chance to develop their business plans further. EIT Health also organised validation interviews for participants with potential customers, investors and partners.

After presenting their advanced business plans, the jury selected 10 finalists and invited them to pitch their projects at the InnoStars Awards Grand Final. The finalists represented various fields in biotechnology, medical technology and life sciences, ranging from a real-time monitoring device aiming at the traceability of transfusion blood bags and a digital iron deficiency screener, to an advanced antibacterial wound dressing and ultra-personalised nutritional advice platform.

Tamás Békási, responsible for the InnoStars Awards programme at the EIT Health InnoStars: “InnoStars Awards is one of EIT Health’s programmes for early-stage start-ups. During the past six years, almost 70% of accelerated solutions in the programme have already been launched on the market. This underlines how valuble it is to invest in innovative biotech, medtech and digital health spin-offs and start-up teams discovered in the Central, Eastern and Southern European region. We provide teams with mentoring, validation and networking opportunities to help turn their ideas into viable products and services that contribute to better healthcare and enable European citizens to live longer, healthier and happier lives.”

During the event, the carefully selected finalists had the chance to battle it out on stage to take home the glory and the prize package.

Representing innovation from across Central, Eastern and Southern Europe, Italy was represented by four startups, Greece by two, while one came from Estonia, Hungary, Romania and Czechia. You can find out more about the finalists here.

And the winners were….

According to the founders, the solution could help save up to €7.5 billion for the European healthcare system and reduce morbidity rates, as it will avert open bypass surgeries for approximately 300k patients.

Mihalis Boutaris, Founder of Shuttle Catheters: “The grant and the high-class training provided by EIT Health InnoStars experts have helped us move forward with our solution to enter the market very soon. InnoStars Awards is the best place to kick off the MVP and get an extra bonus – access to the biggest community of innovators, investors, hospitals and other key stakeholders who are relevant for our project’s success.”

According to the team the large surface area of the human lung, combined with its abundant blood supply, makes inhaled drug delivery one of the best routes for treating an array of disorders. The problem is that current inhaled delivery devices waste a lot of medication, and deliver less than a quarter of the active ingredient. Because of this, current devices cannot be used to deliver expensive or high-precision agents, such as insulin, antibiotics or gene therapy, or replace injectables. This is what Sprin aims to change, delivering precision medication in a safer, more effective and pain-free way.

Founded in 2020, Medicud is developing a mechanically-powered negative pressure wound therapy system that has the same performance as electrical devices already on the market. The aim is to provide a cost-effective and discrete alternative, that doesn’t contribute to functionality – a game changer for developing countries and crisis situations.

The device, which is portable, wearable and easy-to-use, aims to be used to prevent post-operative infections as well as chronic wounds.

This year, a special Public Award, and Media Award are also given to two high-quality up-and-coming healthtech startups.

The Public Award went to ApniWave!

Founded in Greece, ApniWave is working on a smart screening device combining a sensor, an on-board computer and an AI-enabled software suite to detect obstructive sleep apnea hypopnea syndrome (OSAHS) at home. The team was participating in the RIS Innovation Call, which is a unique programme supporting the development of local innovative healthcare projects located in moderately-progressing European regions.

With the Public Award prize, the team gets an exclusive media training course and communications masterclass.

Home Diagnostics has developed an at-home testing product called Ailin. The aim is to give people access to a scientific, rigorous and personalized understanding of the state of their health. Based on test results experts provide recommendations and a clear roadmap to achieve an optimal state of health. The team participated in the Attract to Invest programme coordinated by EIT Health InnoStars which prepares companies from CEE and Southern Europe for successful investment rounds.

The Media Awards winning team will join 2023 edition of the EU-Startups Summit 2023 and will receive special exposure at EU-Startups.com.

Editor’s Note: This post has been created in collaboration and with financial support from EIT Health. If you’re also interested in partnering with us, just reach out.

EIT Health is one of the biggest European public-private partnerships in the field of healthcare innovation. Comprised of approximately 150 Partners, EIT Health is a unique European network of top companies, universities, research and development centres, as well as hospitals and institutes. EIT Health’s role is to build an ecosystem that enables the development of healthcare for the future so that European citizens can live longer and healthier lives.

Patricia Allen
is the Head of Content at EU-Startups. With a background in politics, Patricia has a real passion for how shared ideas across communities and cultures can bring new initiatives and innovations for the future. She spends her time bringing you the latest news and updates of startups across Europe, and curating our social media.
RELATED ARTICLES
Greece-Startups