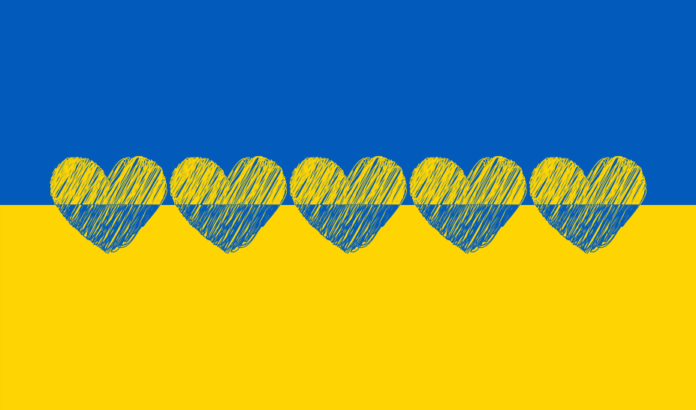 Scenes have come to European soils that the majority of us never could have expected to experience in our lifetime. As Ukraine has experienced invasion from Russian forces, the continent has been left shaken, shocked, and overwhelmed by what has happened.

During this time, across Europe, we have seen heartbreaking footage emerge from Ukraine of civilians sheltering in underground stations, fleeing their country in desperation, and people across the nation taking up arms in an effort to defend their homes. We have all been inspired by different stories of people bravely stepping up to confront this invasion – one such example that captured our readers’ attention being Kira Rudik.

In such uncertain and frightening times, many of us want to take action, to support those suffering. Across Europe, we have also seen an incredible swing of solidarity towards Ukraine and the Ukrainian people. From collection points sending vital supplies to IDPs and refugees to financial and political support and beyond, the dire situation has shown the continent is united.

The European startup ecosystem has also been playing a key role in supporting Ukraine during this time. Countries such as Estonia, Latvia and Lithuania are giving practical information and tools for startup founders to get visas, and companies are getting help to relocate HQs. Ukraine itself has a thriving and healthy startup ecosystem and an inventive and talented nation known for creativity and an ability to come up with innovative solutions to everyday challenges. It is a resilient nation, and that is clear to see today.

Here, we look at the reactions of different players in the European startup ecosystem, as well as how we can continue to best support Ukraine and Ukrainian civilians. We will keep updating this page, so let us know of any initiatives we should include.

TechUkraine is leading the charge on tackling disinformation, playing a vital role to ensure that verified information is disseminated about the ongoings of the war. It is encouraging people to spread only verified information and is also supporting organisations that strengthen Ukraine’s defence capabilities, as well as providing verified sources and links to important social media accounts.

“Tech community, being an active part of the society, consisting of thousands of educated people with a global outlook, is one of the pillars of Ukraine’s resistance”

Established by three dutch entrepreneurs (Ali Niknam (bunq), Joris Beckers (Picnic) and Robert Vis (MessageBird)), the People for People foundation has been set up to support refugees fleeing the conflict. Already, the foundation has been providing temporary accommodation in Bulgaria and Georgia and is assisting Ukrainians in the process of getting work visas in the Netherlands.

The aim is to get as many people to safety as possible – Ukrainians and Russians alike. The platform is working tirelessly to help people return to live with peace and harmony and are connecting those who want to help, with people who desperately need it.

Tech to the Rescue

Polish initiative Tech to the Rescue is using tech to provide solutions. Founded at the start of the pandemic, the movement has now pivoted to support Ukraine. They have launched TechforUkraine to help design digital solutions to maximise impact. One of the first is razemzwami.pl, which aims to provide authoritative information collated from reputable sources. They have also launched SOS UA, an AirBnB-style platform that will connect those seeking help with those that can provide it.

Glovo is encouraging solidarity and support. The team has developed a strategy to put people first and prioritise safety and wellbeing. All Glovo employees in Ukraine are being supported to move out of the north of the country and move west if they can. Glovo is offering temporary accommodation for those employees able to move into neighbouring Moldova, Poland and Romania and salaries have been advanced. The firm is encouraging employees at Glovo to donate supplies and ride for a cause. For each ride, Glovo will donate 15€ directly to Ukrainian Red Cross this month. Glovo launched in Ukraine in 2018, and set out a plan to support its community almost immediately with the onslaught of this crisis. On March 9th, Glovo announced its platform had been made available to provide essential services in 20 cities across Ukraine, including Kyiv. Glovo will not have any financial gains from the service in Ukraine and has waived the commissions/delivery fees to partners, NGOS and pharmacies.

Crypto-platform Bitpanda is enabling users to donate the crypto assets of their choice to their dedicated and newly-set-up Emergency Response Fund, contributing to causers that provide humanitarian support to people affected by the war. The firm has begun the campaign with their own donation of €100k, will match all donations up to €500k, and each of the founders are making an individual donation of €50k to the fund. The initial beneficiaries will be Save the Children – Ukraine Crisis Relief Fund and Doctors Without Borders (MSF). Further, with the eviction of Russia from SWIFT, Bitpanda has been keeping its community updated in terms of what this means for each of us. Keeping people informed is one of the best ways we can be supportive of people suffering in this war. The company is also placing a strong emphasis on ensuring team members are supported in prioritising their mental health and wellbeing, recognising that this is an anxiety-inducing time for all of us.  To this end, the startup is offering free and anonymous mental health support to all team members.

Delivery Hero is working internally to actively support any employees who have been affected and who require assistance for themselves and their families, with travel, accommodation, salary advances, and paid time off. The company is working with the World Food Programme to redirect the meal donations feature to support the Ukrainian emergency food assistance operation. Users can directly donate towards helping the people in Ukraine and to those in neighbouring countries who have been displaced as a result of the invasion. They will match any donations made by employees to the International Red Cross, to the value of €1 million.

Based in Estonia, Bolt is donating 5% of every order in Europe to NGOs supporting Ukraine, including the Red Cross. It’s predicted the company will be able to donate more than €5 million over the next two weeks and have already sent €1 million. In addition, the firm reduced the commission for all services in Ukraine to zero and incentivised drivers in Poland and Slovakia to accept rides on the Ukrainian border to transport people to safe destinations – helping to keep people moving. Bolt has taken the decision to remove all products produced in Russia or associated with Russian companies from Bolt Market, as well as to close down all operations in Belarus.

Fintechs For Ukraine has been launched to encourage tech firms to raise as much money as possible to help support victims of the crisis. All donations raised will go directly to Save the Children’s Ukraine Appeal which aims to see the fintech community, across Europe and beyond, join forces and come together by pledging money in support of the campaign. Monneo is launching the campaign, covering the payment costs to ensure 100% of donations go to the charity. Monneo is also urging businesses who may not currently be able to afford cash donations to consider promoting and sharing the message of its new initiative instead, via their social media channels. Lili Metodieva, Managing Director of Monneo commented: “As we watch the horror unfolding in Ukraine, we really wanted to find a way to help. We hope to encourage our colleagues and peers to stand together and raise as much money as we possibly can to directly help the people in Ukraine in desperate need of vital supplies.”

Single.Earth is launching a #StandWithUkraine NFT collection, will all proceeds going towards Ukraine. Over 2000 unique artwork, created by Duncan Halleck, represent the Ukrainian people holding on to their country’s freedom. The NFT collection will be sale on the Magic Eden marketplace and proceeds will go to the International Committee of the Red Cross.

Initiatives from across Europe

We would like to also point out that we have not been able to cover or document everything being done to support Ukraine at this time. The truth is, we are living in dark, troubling times but the European community has certainly rallied together. There are numerous initiatives and companies drawing up plans to protect people, support aspirations, and advocate peace.

What you can do to help Ukraine

Firstly, is to remain as informed as is in your capacity. Take care to spread compassion, empathy and facts. Being well-informed on the situation is one of the best tools to protect people.

Secondly, you can donate to and support efforts on the ground. Signing petitions, donating to organisations, and contributing to collections are great ways to get involved and show your care for Ukraine and the people suffering in this war.

Here are some places that you can direct your attention to:

You can also show your support via social media. Using #StandwithUkraine is an incredible tool of resistance and solidarity in the modern age.

“We know we are fighting for our country, for our freedom to build our future according to global values. And there is no way back. Freedom, once tasted, can’t be forgotten. High ideals, once understood, stay with us forever.”

Supporting Ukraine’s startup ecosystem: An inside look into the EIC’s €20 million fund