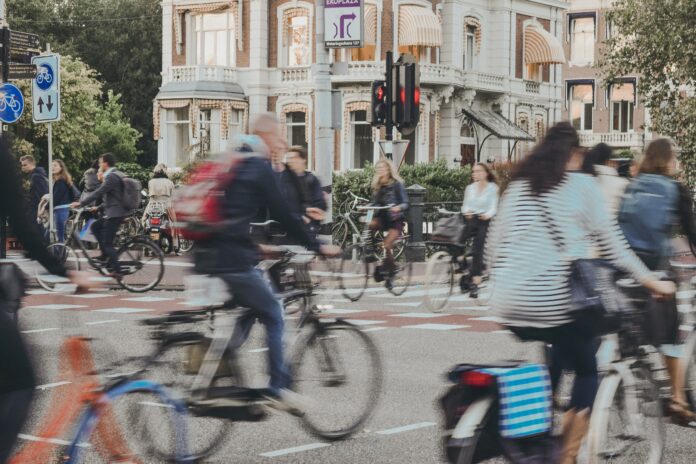 Over the last couple of years, the European transport sector has witnessed massive changes due to the advent of technology and a global drive to move to more sustainable, greener, and more accessible choices.

Startups have the potential to lead the way to a mobility revolution, and 2021 saw a breaking record for investment in European mobility startups of all stages. But which ones should we keep an eye on in 2022?

Here we take a look at some of the most promising startups shaping how we move from A to B – those that are developing breakthrough technology and/or paving the way for new mobility concepts.

Dance – The Berlin-based startup tackles decarbonization by offering an e-bike subscription service, encouraging more people to choose an e-bike over a car by giving them the support they need to make cycling commutes easy. The company designed its own e-bike called the Dance One. It features a carbon belt, hydraulic discs, an integrated smartphone mount and a detachable battery with an expected range of 55 km. Customers don’t buy the bike directly. Instead, they subscribe for a €79 fee per month. If you have a flat tire or another issue with your bike, Dance can send a mechanic to fix it for you. Founded only in 2020, the startup is already highly successful and has succeeded in securing a total of €36.6 million in over four rounds, €15 million of which came just three months after launching its pilot programme.

Manna – Founded in 2018, Irish startup Manna builds and operates unmanned aerial vehicles (UAVs), which perform high-speed deliveries of takeaway food, groceries and pharmacy goods of up to 3kgs in suburban last-mile settings. On a mission to improve the world, the young company from the small Irish town of Oranmore raised €20.6 million in April 2021, convincing investors of its high potential. The company plans to expand to cover 150,000 customers in Ireland in the next 12 months before launching commercially in two European countries in 2023. While there are still regulatory hurdles to overcome, Manna has done an excellent job in demonstrating its core role in the future of last-mile deliveries. We also considered it in our list of Irish startups to watch this year.

Otiv – Committed to creating the cities of the future, Otiv is an AI startup revolutionising on-rail transport by applying assisted and autonomous technology to make it safer and more efficient. Founded in 2020 and based in Ghent, Belgium, the startup announced its seed round investment last year in April and is now focusing its solutions on trams in complex urban environments, trains on shunting yards, and locomotives on industrial sites. The startup has developed an ADAS and a remote shunting solution to support the driver in navigating complex situations and is building towards a fully autonomous solution, thus striving to make a meaningful societal impact in the field of railway operations.

Cazoo – Referred to as the ‘Amazon of the used car market,’ Cazoo enables customers to purchase a used car entirely online, have it delivered to their door in a few days, and have a week to make sure it fits their lifestyle. Founded in 2018 in the UK, the company is backed by leading technology investors globally and has been publicly traded on NYSE since last year. It is currently one of the fastest-growing businesses in Europe, pioneering the shift to online car buying. Cazoo made several acquisitions in 2021, including Cluno in February, Van365 in October and Swipcar in November. The startup began 2022 with the acquisition of Italian brumbrum – a sign of the year to come?

Voi – One of Europe’s micromobility giants, Voi Technology was founded in 2018 in Sweden with a vision of “cities made for living.” The electric-scooter startup encourages people to use sustainable, carbon-neutral transport, thus helping to free cities from congestion, pollution and noise. Voi has set an ambition to take one billion car trips off Europe’s and UK’s roads by 2030. The company recently closed its Series D funding round of €101 million, enabling it to continue to lead the micromobility industry. Furthermore, the platform claims to have won more city tenders than any other operator in Europe and plans to go public in 2022.

Zeelo – London-based startup Zeelo developed an innovative staff commuting platform offering electric commuter bus services for people living in rural areas or in ‘public transport deserts’ —  places where there’s no option but to drive a car. With 600% growth in the last 18 months, Zeelo helps employers reduce the carbon emissions of their staff and is on an exciting journey to shape the way people travel. In 2021, the startup raised another €10.5 million in new funding to accelerate its expansion across three countries – the UK, US, and South Africa.

MaaS Global – A world leader in the field of Mobility-as-a-Service and the company behind the award-winning Whim app, Maas Global was founded in 2015 and is headquartered in Helsinki, Finland. The multimodal mobility Whim app has been launched in a number of markets in Asia and Europe and enables users to move more freely by seamlessly combining various modes of mobility, from public transport to taxis to bicycles and electric scooters, thus promoting sustainable mobility in cities. Last year in August, the company announced its next phase of growth with the successful €11 million extensions of its Series B financing round from a combination of new and existing investors.

Einride – Considering that CO2 emissions are our generation’s greatest challenge, Swedish startup Einride is taking logistics into a new direction with autonomous and electric freight solutions. It currently operates one of Europe’s largest fleets of electric trucks, but its main offering is its electric autonomous pods, self-driving freight trucks built without a front cab. Founded in 2016, the startup also offers an IoT system called Saga that runs through its fleet and helps the company and its shipping partners optimize routes, and manage and electrify fleets. In May 2021, the company raised €97 million in a Series B round to expand internationally. And as a matter of fact, Einride has already had operations up and running in the U.S since November last year.

Scoobic Urban Mobility – Spanish startup Scoobic develops logistical solutions for urban areas using electric vehicles. Founded in 2015, the startup proposes a compact three-wheel EV that can travel up to 100 km on just one fully charged battery. Developed by vehicle and driving enthusiasts, Scoobic provides a solution to improve life and mobility in cities in the face of the rise of online commerce, which has already attracted the attention of giants such as Amazon and Carrefour, and public companies such as the Spanish postal firm Correos. In 2020, they nabbed €2 million and have been growing fast since.

Avrios – An award-winning fleet management software, Avrios was founded in 2015 in Zürich to help businesses stay in control of their vehicle costs and data. Using a cloud-based management software platform, it helps more than 1,000 companies across the world to manage fleet costs and make decisions on employee mobility. Avrios’s solution allows medium-sized companies and large corporations to digitise and automate all the data associated with their fleet, thus saving a lot of time. Avrios gives fleet managers a complete overview of their fleet with all the information, such as purchase or lease costs, damage, mileage, and local compliance requirements (e.g driver’s license checks, UVV checks and driver training), all aggregated into a single platform.

Iulia Baidac
Iulia is a strategist, communications and content marketing professional, based in Vienna. Passionate about cross-industry innovation, startups and technologies that make an impact on the world, her experience spans different European countries and sectors. A storyteller at heart, she enjoys helping entrepreneurs get the word out about their ideas.
RELATED ARTICLES
Funding