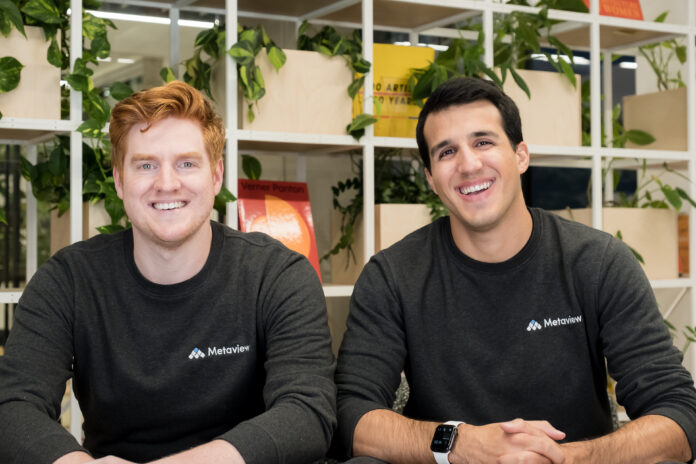 Metaview, founded in 2018, has just raised €5.29 million for its pioneering interview intelligence platform. This seed funding brings the total amount raised by the London-based company to €6.7 million.

The young company is on a mission to enable fast-scaling businesses to harness the power of data to optimise interviews, making for a fairer and enhanced hiring process.

Founded by Siadhal Magos and Shahriar Tajbakhsh, Metaview offers a platform that records and transcribes interviews and then provides unique data alongside automated training tools to help hiring teams improve their process. As a result, the innovative tech expedites hiring decision making as it becomes informed by data, rather than subjective memory. Metaview customers have experienced a 28% reduction in time-to-hire.

Talent acquisition is a key limiting factor for fast-growing businesses to scale, and central to this is the hiring process. Interviews formats too often rely on interviewer intuition to evaluate candidates, rather than objective data insights. This inevitably leads to inconsistent hiring practices, hindering both the business and prospective candidates. Businesses without a standard interview process are more likely to make a poor hiring decision, which is a costly error.

A major problem in the talent acquisition and hiring space is of course gender bias. Data from Metaview shows that women are typically given 12% less speaking time during interviews than men. By harnessing Metaview hiring teams can ensure that they are conducting interviews on a fairer basis.

What’s more, the platform can address issues around lack of rigour among interviewers. According to Metaview’s data, almost a quarter (23%) of hiring managers ask fewer than five questions of each candidate. Having crucial data insights means that issues of rigour and bias can be tackled, making for a more open and transparent hiring process.

Siadhal Magos, co-founder and CEO of Metaview, said: “Our mission is to power hiring decisions with truth. The best companies know it’s their people that determine their ability to succeed as an organisation. Yet for the longest time they’ve been recruiting based on guesswork, memory, and bias. Previously, any data that was used to improve hiring performance only ever measured the symptoms, never the causes. Now we can bring transparency to the previously opaque interview process, and use technology to improve the most important moments in hiring.”

Metaview has had a 300% year-on-year growth and is already powering the interview processes of hyper-scale companies across the UK, Europe and the US, such as Robinhood, Anduril, AngelList, Hudl.

The fresh funding for the startup was led by Vertex Ventures US, alongside additional investors Fly Ventures, Seedcamp, Village Global, PrimeSet, Moving Capital (Uber alumni fund), and Palumni (Palantir alumni fund). The company will use the funding to develop its product offering, accelerate market expansion across Europe and the US, and triple its team size over 2022.