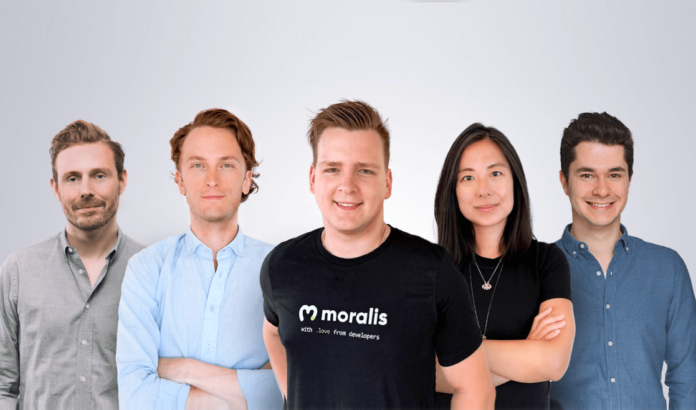 Moralis, the next-generation blockchain development platform, today announced it has secured €11.5 million in seed funding, led by EQT Ventures. Founded in 2020 by Ivan Liljeqvist (CEO) and Filip Martinsson (COO), the Moralis product has been live since June 2021 after a beta phase which launched a few months earlier.

Moralis, which is headquartered in Stockholm, provides a complete end to end blockchain application development platform powering decentralised apps (dApps), uniquely allowing developers and companies to focus on the front-end, while handling the entire back-end of development. The result is a product that saves time and money for projects and teams that otherwise wouldn’t have the resources to build, manage, and maintain complex blockchain infrastructure.

Decentralised apps exist and run on a blockchain, or peer-to-peer (P2P) network, of computers used for the likes of cryptocurrencies, NFT marketplaces, block explorers, decentralised investment platforms and crypto games. However, decentralised technology is still in its infancy, and requires more time for the broader developer community to adopt and become familiar with, and is proving an exciting growth area.

While there are nearly 25 million developers in the world, recruiting talent is a universal challenge and there are only around 200,000 developers in Ethereum, the largest blockchain developers ecosystem. Moralis enables blockchain projects to build more efficiently, and enables hiring from a larger talent pool. Virtually all web developers will be familiar with Moralis’ plug-and-play tools, and so with using this technology they will be able to start programming and swiftly deploy blockchain dApps, even without specific blockchain expertise.

In addition to the recruitment challenge, there are many obstacles inherent to blockchain technology when building dApps that developers may experience. Challenges such as user authentication, node management, real-time notifications, data indexing, and data aggregation tend to be addressed by different projects in isolation, making it difficult for traditional web developers to jump into the Web3 world. It becomes even more complicated when cross-chain (interoperability between two independent blockchains, allowing them to communicate with each other) and Layer-2 solutions are involved. As blockchain adoption has grown over the recent years, so has the number of projects and technologies needed to interact with blockchains, leading to a fragmented ecosystem.

In response to the growing challenges, Moralis has been building a middleware platform that aggregates a long list of services ranging from node management, authentication to real-time and historic transaction indexing into a single SDK (Software Development Kit). The €11.5 million seed funding secured by Moralis will be used for hiring and continued product development, with the vision to enable developers to build enterprise-scale blockchain applications rapidly, cutting cost and complexity from the equation.

In doing so, Moralis has the ambition to become the definitive gateway from Web2 to Web3, empowering the next generation of developers to build highly scalable and secure dApps in a matter of days, not months. Moralis’ chain-agnostic approach aims to future-proof dApps, as developers can work with new blockchains seamlessly.

Moralis CEO Ivan Lilijeqvist stated: “We are overwhelmed by the positive feedback and excitement from the blockchain community. We’ve already seen massive, sustained adoption in our first few months, amassing over 30,000 developers since launch, and the growth shows no sign of slowing. This immense interest further validates Moralis’ business proposition, showcasing how we solve the pain points with existing blockchain development.”

2021 has seen dApps become mainstream for consumers. The funding from EQT Ventures will enable Moralis to build the most robust and scalable platform for developers to build Web3 applications for the masses.

Commenting on the Moralis mission, Antoing Moyroud from EQT Ventures stated that “easy-to-use and scalable infrastructure tooling will be the key to unlocking the next wave of developers building decentralised applications. When meeting Ivan and Filip, we were fully aligned with their vision to democratise dApp building with best-in-class tools. It’s a privilege to support them on the next chapter of their journey – time to build!”

Patricia Allen
is the Head of Content at EU-Startups. With a background in politics, Patricia has a real passion for how shared ideas across communities and cultures can bring new initiatives and innovations for the future. She spends her time bringing you the latest news and updates of startups across Europe, and curating our social media.
RELATED ARTICLES
Startups by Country