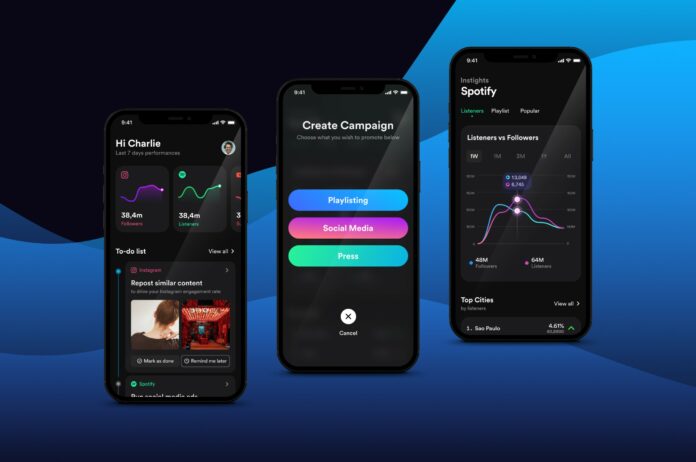 A former Universal Music senior analyst has secured around €290K of investment to launch un:hurd, an AI-powered personalised digital platform specifically for independent artists and record labels to help them break into the industry and grow.

After generating 25 million Spotify streams for independent artists in just one year, un:hurd, a data-driven music marketing company says the new app will help more artists and labels find where their fans are, who they interact with and which playlists they should be pitching to.

As one of the first of its kind, un:hurd’s unique industry-leading algorithms take an artists’ data and then turn it into targeted and practical marketing tips to create impactful campaigns across the social media and streaming landscape.

Alex Brees, CEO of un:hurd said: “Every month over one million songs are released on Spotify which makes it hard for artists to cut through the noise. Major labels dominate the market by investing millions in their artists, leaving independent artists powerless and overshadowed.

“Moreover, over the years, there has been a huge increase in the desire to understand and interpret music data. The only issue here is that there is no context or way for artists to take action once they visualise their data. Today there are more artists than ever but still not a suitable marketing solution – thousands of distributors, thousands of production tools, but not one, coherent, easy to use marketing tool that uses artists’ data to make smart marketing decisions easier for artists.”

Brees added: “That’s where un:hurd comes in. Not only will the app provide you with visualisations, but it will also provide you with clear, concise and actionable next steps. We are on a mission to empower independent artists. By leveraging data and AI, un:hurd delivers the most effective and transparent way to promote new music and is making data available and understandable to the masses. This is us putting artists first and levelling the playing field in what’s often an unfair game.”

For consumers, DJs and music lovers, the platform will also bring huge benefits.

“Although the app is for artists and our goal is to transform the music marketing landscape for content creators, there will be a benefit for consumers too, ” says Brees. “The work we’re doing will favour high quality playlist curators on Spotify which alongside benefiting artists will also mean a more genuine music discovery experience for those that look to discover music through playlists. It’ll also mean ads will be served to consumers who show a genuine interest in similar artists, genres and brands – therefore allowing for a more engaging and tailored social media experience.”

Over the past year, un:hurd has delivered positive business growth, achieving 100% month-on-month growth in revenue since receiving around €290K of investment, and boasts prominent clients such as Copper Dog Whiskey, Sofar Sounds, D’banj, SAINt JHN, DTG and Fraser T Smith to name a few.

User, drummer and DJ McKNasty (who also appeared on Britain’s Got Talent) says: “un:hurd is the first marketing service I’ve tried that delivers genuinely new fans. I landed on real Spotify playlists and grew my artist profile, going from 0 to 50,000 streams in just eight weeks!”

The startup was founded in 2016, and the app will be available for download from October this year.