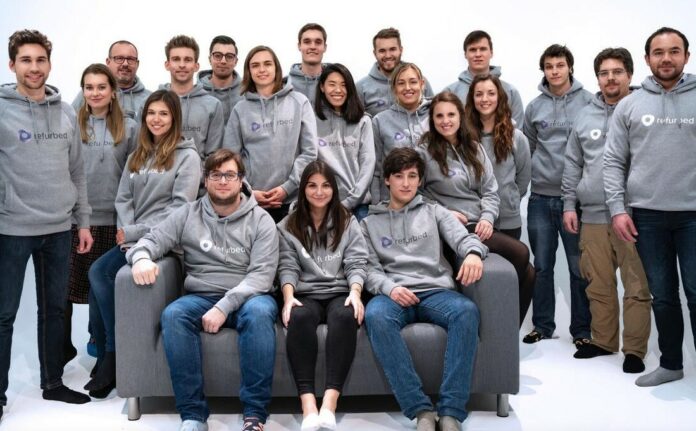 Refurbed, a leading marketplace for refurbished electronics who we included in our 2021 list of 10 promising circular economy startups to watch, has raised around €45.4 million in a Series B funding led by Evli Growth Partners and Almaz Capital. They are joined by existing investors such as Speedinvest, Bonsai Partners and All Iron Ventures, as well as a group of new backers — Hermes GPE, C4 Ventures, SevenVentures, Alpha Associates, Monkfish Equity (Trivago Founders), Kreos, Isomer Capital and Creas Impact Fund.

The startup states that the electronics industry is one of the largest industries in the world and emits copious tons of CO2 per year, with the total annual carbon footprint of manufacturing mobile phones equals to at least the annual carbon emissions of a small country. The team signals that this has a significant contribution to both climate change and the e-waste challenge (the 50 million tonnes of e-waste generated every year will more than double to 110 million tonnes by 2050). WEF experts state that repairing – not recycling – is the first step to tackling this issue.

The team behind refurbed is contributing to solving the problem. Since the launch of their marketplace in 2017, the company has already saved 170 tons worth of electronic devices and subsequently managed to reduce the CO2 impact by 31,000 tons.

Refurbed is an online marketplace for refurbished electronics that are tested and renewed in up to 40 steps, effectively functioning like their new counterparts. Being up to 40% cheaper with a minimum 12-month warranty included, refurbed makes purchasing sustainable devices easy, affordable and risk-free. In 2020, refurbed grew by 3x and reached more than €100 million in GMV. The company continues to improve its operations by implementing new quality assurance measures and pricing algorithms, which effectively enables refurbed to offer high-quality devices at a low price tag.

“We founded refurbed with a mission to get at least one refurbished device into every household in Europe, thus changing the way we consume electronic devices as a society.,” Peter Windischhofer, co-founder of refurbed, said. “We’re extremely proud of the results we were able to achieve thus far and are set to keep on growing internationally to become the Amazon for refurbished products in Europe.“

Refurbed operates in Germany, Austria, Ireland, France, Italy and Poland, with 3 other countries to be branched out to till the end of 2021. The company has 11K+ listed products on its marketplace from 130+ merchants and currently employs more than 120 people. Up to date, refurbed has sold over 800,000 products through its platform, planting one tree in Haiti, Madagascar, Kenya, Indonesia, Mozambique or Nepal for every device sold.

“We at Evli Growth Partners see the huge potential behind the way refurbed contributes to a sustainable, circular economy and are thrilled to lead the Series B,” commented Riku Asikainen at Evli Growth Partners. “We are excited to support a mission driven company that is both financially and environmentally so successful.”

With the equity raised, the team plans to strengthen its leading position in the DACH market for refurbished electronics and focus on geographical expansion by entering more European countries. Refurbed also plans on further developing and improving its product portfolio as well as focusing on scaling its international team, employing specialists from all across Europe.

“The growth of the company has been very impressive and we see a lot more potential,” explained Charlie Ryan at Almaz Capital. “We are happy to support the company on its way and believe refurbed will succeed in its active international expansion.”

“We see consumer behavior is changing rapidly throughout Europe towards sustainability and this is especially true for electronics” said Pascal Cagni, partner at C4 Ventures and former VP Apple EMEIA (2000-2012).

Share
Facebook
Twitter
WhatsApp
Linkedin
Previous article
10 promising Vilnius-based startups to watch in 2021 and beyond
Next article
New report: Do corporations still want to partner with startups despite the pandemic? (Sponsored)