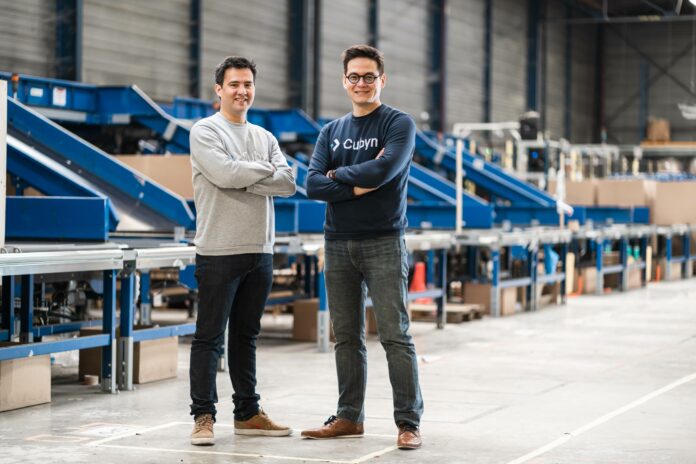 Cubyn will use its new funding to double its team of 85 to 170+ employees by the end of 2021, and deploy its service internationally, starting with Spain and Portugal launching in April 2021 followed by Italy, UK and Germany. The company will also open a 25,000 sqm automated facility in the Paris area in the coming months, to increase its automation capabilities and continue to drive costs and delivery times down.

Cubyn (founded in 2015) made a major, strategic product launch into end-to-end ecommerce fulfilment in Q3 2019, a fast-growing and highly fragmented market estimated at €500 billion worldwide. Since then, the company has built the best proprietary technology to streamline merchant logistics, ranging from web apps to advanced optimization through algorithm and warehouse robotics Cubyn’s technology stack enables the company to operate a fully integrated fulfillment solution at a fraction of the industry standard cost. This positioning allowed the company to grow its Gross Merchandise Value from €30 million to €250 million in 2020 for its first full year.

“We see a huge opportunity for a neutral, cost-effective, and efficient fulfillment network in the e-commerce space. 15% of the Gross Merchandise Value transacted in e-commerce globally goes to e-logistics. Still today, there is no scalable, efficient logistics solution aside from the ones offered by siloed marketplaces. Cubyn is disrupting the traditional e-commerce third party logistics market from the ground up, offering a better, faster and cross-border service at a 30% lower price. We are also providing merchants with not just additional revenue streams, but with our international roll out, we are now opening up new markets for them, outperforming other options available in terms of cost and delivery speed by far,” said Cubyn’s co-founder and CEO Adrien Fernandez-Baca.

Cubyn merchants can integrate their e-commerce inventory in 1-click and start scaling their sales without worrying about logistics, all while monitoring the process from one simple SaaS solution. When an online order is placed, it is automatically exported and processed from a Cubyn warehouse. Thanks to CarrierPredict, an in-house algorithm developed to determine the most efficient carrier for each package, parcels are inserted into the most efficient carrier network. Cubyn leverages shipping data from millions of parcels to improve the customer satisfaction for merchants and marketplaces alike.

With the pandemic, e-commerce exploded worldwide as billions of people were confined at home. From March to June 2020, e-commerce penetration grew as much in three months as it did in the last 10 years. With a total of €55 million in funding, Cubyn is the uncontested market leader in the booming European e-commerce fulfillment sector. Cubyn is a work-from-everywhere company currently employing 85 people across the globe, and will double its team in 2021 with hires in sales, tech, data, robotics and product. Since inception, Cubyn has processed over 5 million shipments from its warehouse in Paris.

“Covid has accelerated the need for merchants to have a reliable, scalable and tech fulfillment solution. We’re excited to work with Cubyn to scale their business across Europe in the next few months, unlocking access to their cutting edge fulfillment tech for more merchants,” said Antoine Izsak at Bpifrance Large Venture fund.

The team has built a world class fulfillment solution very efficiently in only 18 months very. Cubyn now has the best technology and processes to win the European Market and we are very excited to be part of this rollout phase,” said Louis Bô, Investment Director at Eurazeo.

“International merchants represent 60% of Cubyn’s merchants. Their integrations with some of the world’s best marketplaces along with their European network coverage unquestionably make Cubyn the best option for international merchants looking to expand in Europe. We look forward to working with Adrien and the team to help him optimize and tailor the product through this crucial phase of the company’s growth,” said François-Xavier Copé, Founding Partner at First Bridge.

Share
Facebook
Twitter
WhatsApp
Linkedin
Previous article
Only 10 days left to apply! Win €100K and the support of Amazon Launchpad (Sponsored)
Next article
“The real way to add value to employees is a sense of connection and belonging to the company”: Interview with Workvivo’s CEO, John Goulding