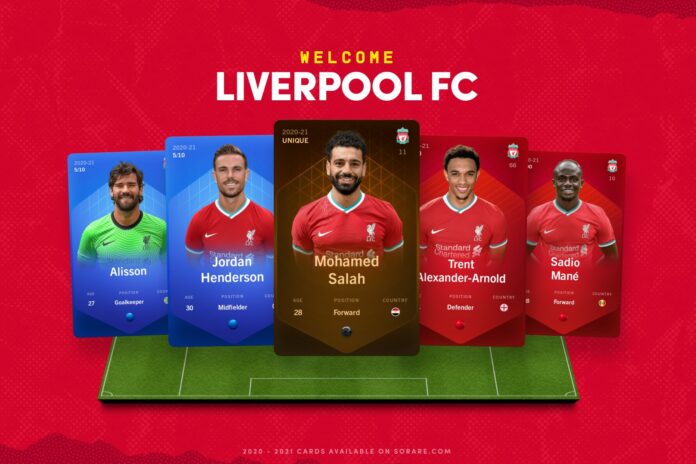 The Paris-based company was founded in 2018, when the two founders Nicolas Julia and Adrien Montfort saw the potential of blockchain technology to create a new category in the sports gaming industry. Since it opened its beta in December 2019, Sorare has grown an average of 52% month on month, and today counts over 55,000 users worldwide, with around 5.5 million in cards sold across 80 countries. Liverpool is the first Premier League team to join.

Sorare’s founder and CEO Nicolas Julia commented: “Millennials are increasingly tuning out of longer sports broadcast formats that don’t engage them. In an economy where the attention of audiences is the single most important unit of currency, games are becoming a new avenue for football brands to reach this highly specific yet desirable demographic.”

Starting this week, Liverpool will further expand its international brand by reaching several untapped audiences of fans: gamers globally as well as growing their fan base in Asia and America where Sorare is growing strongly. Sorare is also effectively opening up a new revenue stream for Liverpool by creating a new game licensing category: fantasy football licensing.

Julia added: “Given the current climate due to the COVID-19 pandemic, this provides a new opportunity for football teams to create interest when live sports games have been significantly impacted. It also offers a way for teams to diversify their revenue streams.”

While football collectors have been able to collect and trade player cards for decades, this was limited to the physical world. Sorare is a global fantasy game that brings people together, especially in times of isolation, through their sports fandom. The fantasy managers buy digital cards of players for the same reasons they buy cards offline – status, differentiation, identity, and membership. Cards are about the nostalgic factor. This also offers the most direct way of investing in the upside of a sports player.

Liverpool aficionados around the world can now play with their favorite footballers by using their cards in their fantasy team. The score of the card will depend on the performance of the player in real-life.

Julia concluded: “We are delighted to have Liverpool FC join Sorare as the first Premier League club. Despite not having any clubs under license in the UK until now, we were impressed to see it has been our fastest-growing market, due to the country’s appetite for fantasy football. By interacting with Sorare’s digital cards, Liverpool fans will be able to express their fandom inside and outside of our global fantasy game.”

Sorare has built an online marketplace where users can freely buy and sell scarce digital collectibles representing football players ranked based on their performances in real matches. The Ethereum blockchain is used to establish who owns the digital card at any given time. It creates a new level of trust and freedom for gamers. More than 100 football clubs from Europe, the United States, and Asia have already partnered with Sorare to issue officially licensed cards so that football fans can collect and play with their favorite players.

Liverpool-based LandTech raises €49.4 million for the international expansion of its proptech platform for development site sourcing