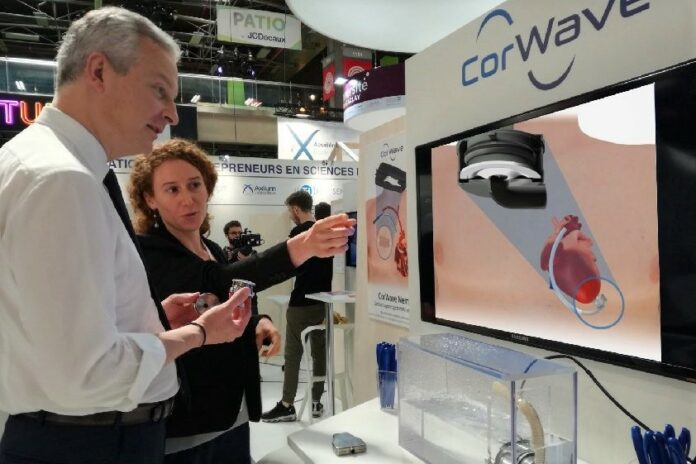 French startup CorWave, which is specialised in the design and manufacturing of innovative cardiac assistance devices, has just raised €35 million. This round was participated in by a consortium of investors, including the EIC Fund, the European Commission’s fund, which is making its very first investment in a private company with an amount of €15 million.

The year is off to a good start for French medtech companies specialising in cardiac solutions. While Carmat has just obtained European certification to sell its artificial heart, CorWave aims to use these new funds of €35 million to start its clinical trials. Behind this financing round are the startup’s historical investors – Bpifrance, Novo Holdings, Seventure, Sofinnova Partners and Ysios Capital – as well as three new players: Financière Arbevel, the Singaporean family office M&L Healthcare and now, the EIC Fund.

With a budget of €3.6 billion, the EIC Fund aims to finance – from €500,000 to €15 million – several hundred SMEs and companies developing breakthrough innovations. CorWave is thus the first private company to benefit from this financial support. This is not surprising when you consider that the startup has already been on the radar of the French government and the European Union for some time.

Several startups are working on the development of cardiac valve or device solutions to improve patient health and survival. CorWave has a particularity: its solution is inspired by biomimicry, i.e. nature and more specifically by the swimming of marine animals.

“All current pumps use rotary technology to circulate blood and produce a continuous flow of blood that is unnatural and leads to complications,” said Charlotte Rasser, Marketing Manager of the startup, explaining that 70% of patients suffer a severe adverse event (such as stroke or gastrointestinal haemorrhage) within a year implantation. CorWave overcomes this major disadvantage with an undulating diaphragm pump that allows the flow rate to be adapted to the patient’s needs. In the event of exertion, the flow naturally increases but slows down when the wearer is sleeping.

To successfully develop such a solution, the startup needed time and money. Launched in 2011, it raised €15.5 million in 2016 in addition to subsidies. This new €35 million budget will enable it “to finalise its device, produce human implantable cardiac pumps and start its clinical trials”, as it announced in its press release. One more step towards its final objective of marketing its products worldwide.