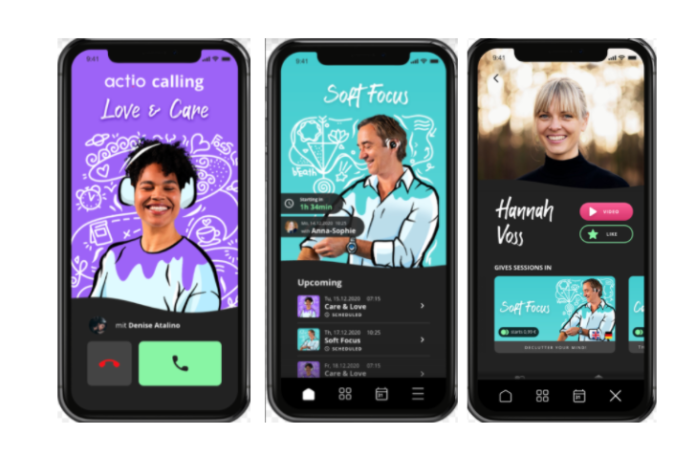 “Pick up new habits’‘ – this is the concept behind the recently launched Berlin-based startup actio.

The live-well being app is a platform and live community for people who want to optimize themselves and their lives in the long run. The app currently offers 100+ unique live sessions daily.

Nikita Fahrenholz, founder of actio, commented: “We are delighted to have partnered with HV Capital and Cavalry Ventures, two of Europe’s leading VC investors who believe in our product vision — that live digital content and interactions will become more prevalent in the future.”

Instead of an ordinary app notification, the actio app calls users when their session is about to start. This added motivation pushes participants to commit – and stick to their commitment.

actio was founded in 2019 by Nikita Fahrenholz and Daniel Stahlkopf, who had previously worked on successful projects such as Delivery Hero, Book A Tiger and Foodspring and are united by their enthusiasm for fitness, mindfulness, and self-optimization. actio has created a live platform for the founders to share those passions with the world, while creating their biggest project yet.

“These days people are ever more striving for personal development and improvement. Digital solutions have become more important, and not just since Zoom and the pandemic. Existing solutions with pre-recorded content consumed alone in front of the screen are not enough, and may further increase our sense of loneliness. With actio, Daniel and Nikita have developed a solution that brings digital content directly to the customer — live and in groups! It’s an idea that will catch on”, says Jan Miczaika, Partner at HV Capital.

Claude Ritter, co-founder and Managing Partner at Cavalry Ventures: “The best startups are created when founders take a challenge from their personal everyday life and turn it into a business idea. Establishing new, healthy routines is difficult. Especially nowadays, when life is often unpredictable, and time for oneself often takes a back seat. At the same time, we need it [now] more than ever — that’s why actio comes at exactly the right time. Nikita and Daniel have developed an app that breaks down many barriers and helps users treat themselves with minimal time and effort.”