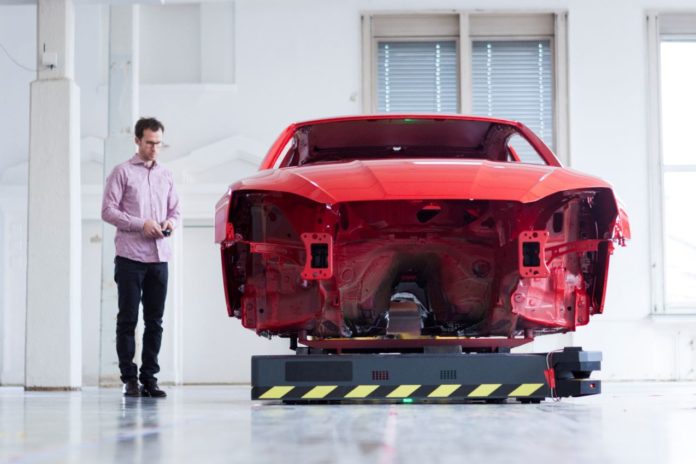 Today German startup arculus, the world’s first “modular production” platform, has announced closing a €16 million Series A round to strengthen its product development, broaden its customer base and prepare for a global rollout. This will support the firm’s mission to transform the one-dimensional assembly line of the 20th century into the far superior, flexible modular production process of the future, capable of manufacturing today’s most complex products more efficiently.

Almost every company that sells a physical product has a production line, making manufacturing one of the biggest industries globally, with a volume of €7.6 trillion and a workforce of 300 million, according to Brookings. Yet these haven’t changed much since Henry Ford developed the techniques of mass production in the early 20th century. They’re run with conveyor belts and rigid processes that are designed upfront.

Traditional linear manufacturing can’t keep up as demand for customisation increases and innovation cycles speed up. With current manufacturing processes, different units take different amounts of time at different stages in the process, disrupting an already complex process and slowing down efficiency.

Arculus, founded in 2016, is a software and robotics company that aims to innovate the way the world makes things and bring productivity to a new level. At the forefront of the Modular Production revolution since 2016, its team is reimagining the production line to relieve humans and machines from non-value-adding tasks.

The team has developed the world’s first modular production platform that allows the top manufacturers to create the most complex and individualised products possible. arculus transforms the one-dimensional assembly line into scalable, flexible assembly modules using real-time controlled software paired with autonomous mobile robots called arculees. Instead of a single line with a conveyor belt, a factory enabled with arculees is made up of modules in which individual tasks are performed and the robots move objects between these modules automatically based on which stations are free at that moment.

Since its founding, arculus has worked with top companies in a range of industries, including Siemens in robotics, heating, ventilation and air conditioning leader Viessmann in logistics, and Audi in automotive. They have also hired a world-class team of over 40 software developers, architects, engineers and production experts and has been backed by some of Germany’s leading entrepreneurs including Hakan Koc (founder of Auto 1), Johannes Reck (founder of GetYourGuide), Valentin Stalf (founder of N26) as well as the founders of Flixbus. By 2025, arculus will work with manufacturers in a range of industries from aerospace to automotive, computer hardware to consumer electronics.

The new funds raised by the startup were led by Atomico, with participation from Visionaries Club and previous investors La Famiglia. As part of this investment round, Atomico’s Siraj Khaliq will also join the board.

Fabian Rusitschka, co-founder and CEO of arculus said: “Manufacturers can hardly predict what their customers will demand in the future, but they need to invest in production systems designed for specific outputs that will last for years. With Modular Production we can now ensure optimal productivity for our customers, whatever the volume or mix. This technological shift in manufacturing, from linear to bespoke, has been long overdue but for manufacturers looking ahead at the coming decades of shifting consumer buying behaviours it is mission critical to survival.”

Siraj Khaliq, Partner at Atomico said: “Given the complexity, customization, and faster innovation cycles involved in manufacturing today, the one-dimensional assembly line of the 20th century does not serve the industry’s requirements. Manufacturers must switch to modular production methods. In the auto industry alone, the application of modular production could save $90 billion. With some of the largest manufacturers already using arculus and the amazing team in place, we believe that arculus is on a path to forever change how things are manufactured.”

Charlotte Tucker
Charlotte is the previous Editor at EU-Startups.com. She spends her time scouting the next big story, managing our contributor team, and getting excited about social impact ventures. She has previously worked as a Communications Consultant for number of European Commission funded startup projects.
RELATED ARTICLES
Startups in general