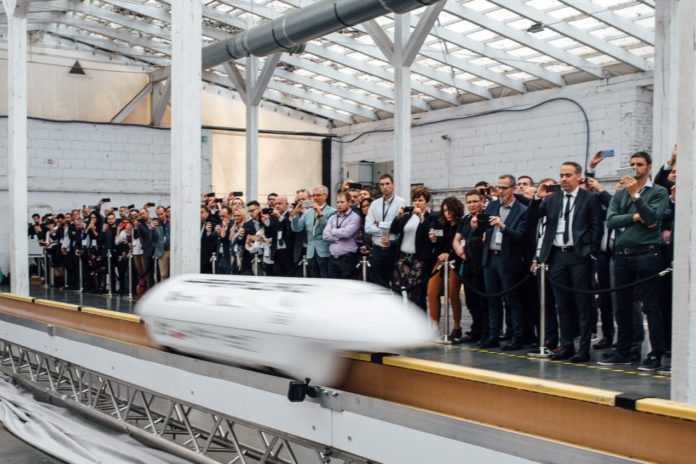 Today Hyper Poland, an innovative Polish transport startup that we already have had our eye on, has smashed its equity fundraising target of €451K and raised more than half a million euros via a successful campaign on Seedrs. The funds will help the company to extend its research on passive magnetic levitation technology, adapting it to existing railway infrastructure and building a full-scale test track.

Hyper Poland, founded in 2015, is working on hyperloop-inspired solutions as an upgrade for the railway industry. Their idea is to introduce a commercial magnetic railway capable of speeds up to 300 km/h, based on magnetic levitation, linear motor and autonomous control systems. This impressive technology can be transformed into a vacuum system hyperrail hitting a top speed of 600 km/h. The team has already previously raised around €4 million to date, and was a Finalist in the prestigious StartUp Europe Awards 2017.

So how does it work? Hyper Poland has divided the process into three stages. The first, called ‘Magrail’, will consist of pilot projects introducing passive magnetic levitation in the next 3 years. In this pilot, magnetic vehicles will reach the speed of 415 km/h on existing, modernized infrastructure, not eliminating regular train connections. Less funding will be required to adjust existing infrastructure in this step, than constructing a new high-speed railway.

The second step is the ‘hyperrail’, which will require the construction of vacuum tunnels over magrail infrastructure. Vehicles would then speed up to 1000 km/h. Then the third step is ‘hyperloop’, being the most innovative, speedy, energy-efficient, and thus the most “green”, form of transport. With hyperloop, the magnetic capsules will accelerate to 1200 km/h on an entirely new infrastructure.

With the new funds raised, the startup will be able to accelerate this 3-step process and bring new transport solutions to European citizens faster.

“Thanks to this approach the most innovative form of transport will not require huge investments in a whole new infrastructure”, explains Hyper Poland’s CEO, Przemysław Pączek.

“Surpassing the initial plan of the campaign allows us to look into the future boldly”, adds Kasia Foljanty, CBO at Hyper Poland. “Because we have already seen a growing interest in our work by transportation market leaders from Germany, Italy, and Poland, we intend to extend our business activities.”

It’s worth noting that hyperloop and other magnetic solutions are no longer a mystery to the international community. The European Union has recognized them as worth supporting as a new direction of transportation development. With this in mind, member states have founded a Joint Technical Committee – JTC 20. Its goal is to create a homogenous system of ultra-high-speed transportation throughout the continent. In addition to Hyper Poland, the companies involved are Hardt Hyperloop (The Netherlands), TransPod (Canada, with offices in Italy and France), and Zeleros Hyperloop (Spain).

Michał Litwin, strategy director at Hyper Poland explains: “Establishing the committee clearly shows that the EU member states recognize magrail and hyperloop as a future means of transport. Common standards will help apply them and reach full compatibility of the system throughout the whole continent. They also strengthen the credibility of those solutions in the eyes of their future users and investors. We already see a growing interest from railway and airline giants from all over the world. With JTC 20 we have an opportunity to build the first fully homogeneous transportation system in Europe”.

EIT Digital Challenge 2021: The 20 outstanding Deep Tech Scaleups which made it into the finals

What would a breakup of Google mean for startups?

Madrid-based Meep lands €4 million to expand its mobility app to the US, Latin America and across Europe