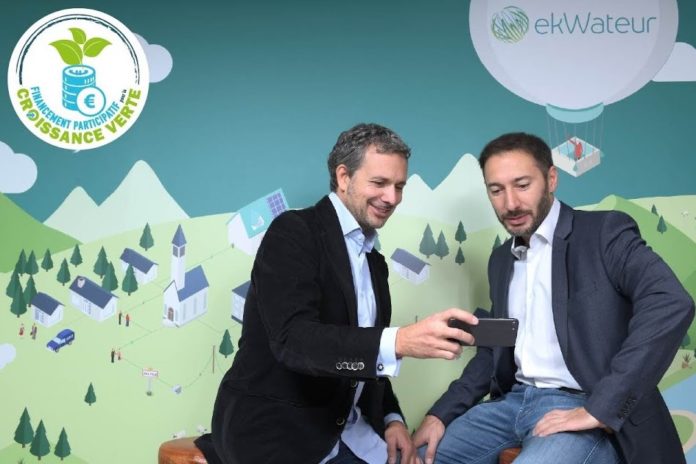 French greentech ekWateur has announced ad successful fundraising of €1.5 million, thanks to a campaign on crowdfunding site Sowefund, which ran from January-March this year.

ekWateur, founded in 2015 in Paris, is the brainchild of Jonathan Martelli and Julien Tchernia. It was after working together in the energy sector that they came up with the idea of launching the first concept of a collaborative energy supplier. ekWateur is an alternative to the dominant players in the French market – EDF and Engie – and offers renewable energy (gas, electricity and wood) to individuals and small professionals. Its ‘collaborative’ nature means its customers can also become part of their customer service team, and produce their own energy at home to reach self-sufficiency.

All in all, ekWateur aims to change the world of energy in France, making it more transparent and ethical. The startup is now France’s 5th largest energy supplier, having just exceeded a new record for the company of 200,000 meters across the country.

With this new crowdfunding, the startup will accelerate investments in its lab (developing new products such as a solar kit for the general public), continue development of a new IT infrastructure and create a data analysis system based on behavioural sciences. It’ll also continue its commitment to the collaborative process, by involving its customers even more in its growth.

“This investment is a good example of consumer demand for an ever-increasing focus on renewable energy. It is also a testament to the strong support of the ekWateur community and reinforces our vision of a renewable energy model”, commented Julien Tchernia, President and co-founder of ekWateur.

Georges Viglietti, President of Sowefund adds: “After a very nice fundraiser on our platform in 2018, we were delighted to accompany ekWateur on this second round of the table which surpassed the record of the previous raise! Proof of this is that our investor members seeded this great opportunity to participate in the development of this promising company.”