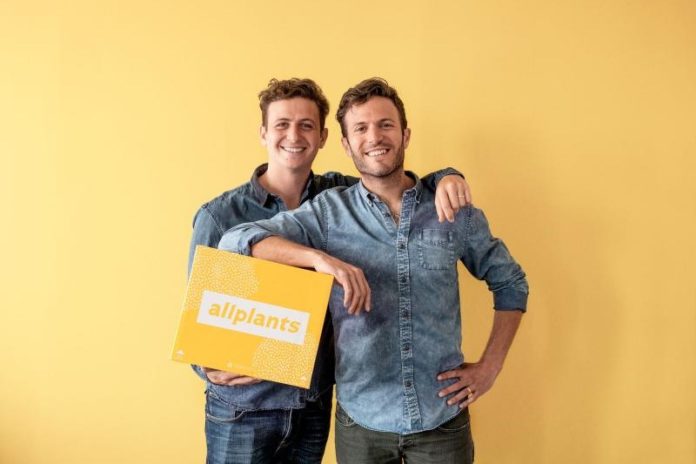 Today UK startup allplants, the plant-based meal delivery company, announces the completion of its €3.9 million funding round on investment platform Seedrs. The allplants concept has attracted over 1,800 investors from its loyal customer base in addition to venture capital firm Octopus Ventures.

Felix Capital, the venture fund behind GOOP and Deliveroo, also participated in this new round, alongside Simon Nixon (ex-CEO of MoneySupermarket.com) of Seek Ventures. They are joined by high-profile individuals Anne-Maire Huby, Co-founder of JustGiving, and Amit Gudkha, Co-Founder of Bulb Energy.

allplants’ initial target for the round was set at €2.3 million but this was met after 48 hours, making it the UK’s largest ever vegan crowdfunding round. allplants went on to raise another approximate €1.6 million during the round welcoming a total of 1,824 investors onboard.

After polling its investors, allplants discovered 76% of them are not vegan. 73% of investors believe there is a lack of healthy and nutritious plant-based meals available in the UK, and 75% said one of the reasons they invested was to support sustainable businesses benefitting the planet.

The funds for this round will be used to develop new food categories and serve over 60,000 meals a week from allplants’ production kitchen – a newly-opened 20,000 square feet dedicated plant-based kitchen in London. This initial funding round with Seedrs precedes a bigger institutional Series B round planned for the end of the year. By 2025, allplants aim to develop distribution partnerships and launch in new markets in Europe and North America.

Founded in 2017 by brothers Jonathan (JP) and Alex Petrides, allplants is an online platform and chef-to-customer service making it easy and exciting to eat more plants, and less meat, with delicious, chef-made meals delivered to your door. A registered B-Corp, it has recently celebrated serving one million vegan meals from their kitchen. allplants has several Great Taste Gold Star Awards for dishes such as Fiery Jerk Jackfruit  and Cauli Tikka Masala.

Jonathan Petrides, Founder and CEO of allplants, said: “We’re delighted with the huge support and belief our community has shown in this crowdfunding round. It’s surpassed our expectations and allows us to look ahead at 2020 with even bolder growth plans. It’s an honour to now have more than 1,800 new investors behind every step we take, and demonstrates the rapidly growing demand for healthy and delicious plant-based meals made convenient. This latest funding round is a true validation of what we’re doing here at allplants – to inspire more people to eat more plants.”

Ann-Marie Huby, Co-Founder of JustGiving, said: “Sometimes a business comes along that makes you sit up and take notice. allplants is one of those for me. No gimmicks, just real, super fresh and delicious meals created and constantly improved with near-fanatical zeal by a team of rare talent. If it continues to listen to customers as brilliantly as it has so far, allplants will be unstoppable.”