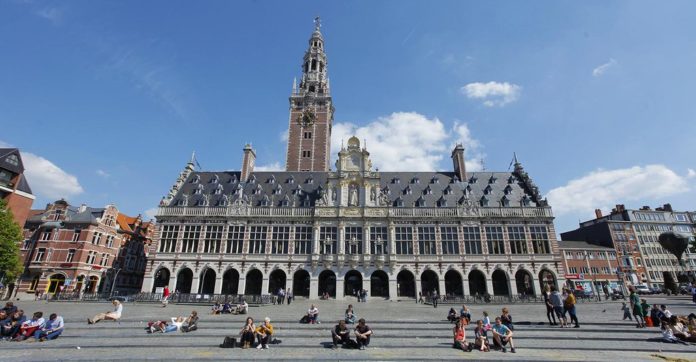 The old Burgundian town of Leuven is the most famous university city in Belgium. It is the home of 600 year-old ‘KU Leuven’, ranked by Reuters as the most innovative university in Europe for the fourth time in 2019. It is the university’s tech transfer office that has been instrumental in transforming Leuven into a startup city, alongside a number of local success stories. As a result, some of the city’s highly educated population and tech-savvy youth have decided to try out the startup life.

Here are 10 startups hailing from Leuven you might be hearing from in 2020.

REIN4CED – Founded in 2015, REIN4CED is on the verge of revolutionizing the bicycle industry. The spin-off has developed a fiber-strengthened composite material based on an intelligent combination of carbon fiber and steel fibers, which makes it possible to produce impact-resistant and lightweight bicycle frames. The end result is a maximum performance with enhanced safety and durability. Backed by the KU Leuven Gemma Frisius Fund, Finindus and Innovation Fund, the startup inaugurated its new carbon frame production facility in Belgium in mid 2019.

Sitemark – The Startupbootcamp alumni Sitemark helps enterprises gather, analyze, and make use of aerial data. Their offer is an AI-powered aerial intelligence platform that enables customers to optimize solar and wind farm inspection, large scale security, and logistics across large remote locations. Three years after its founding in 2016, the startup raised a total of €5 million in a Series A investment round and has attracted companies such as Vinci, Engie, Bouygues and Orix already as clients.

Virovet – ViroVet (founded in 2015) is a biotech startup working on the development of a new generation of vaccines based on a unique proprietary technology platform originating from the University of Leuven, called plasmid-launched live attenuated viruses. The award-winning startup is also active in the field of antiviral drugs and is now working with researchers at The Pirbright Institute to develop the first antiviral drugs that act against African swine fever (ASF).

Sweepatic –  Sweepatic, founded in 2016, offers a reconnaissance platform that helps companies protect their Internet-facing assets, examine their exposure to attacks and provide counterintelligence measures. As a cybersecurity startup, their goal is to help organizations be more informed, pro-active and resilient against cyber-attacks. Two years ago they discovered and secured a significant security gap in one of the US government institutions, as well as identified a security breach in an EU institution.

Bringme – Bringme (founded in 2014) develops a suite of solutions, destined to be part of the 2.0 habitat of tomorrow. The Bringme Box is their flagship product, which is essentially a cabinet with several locked compartments and is designed to revolutionize the delivery of parcels. The Bringme Desk is envisioned as a virtual reception and combined with Bringme Bell, Lock, Postbox and Manager, it is ideal for the hospitality sector. The latest addition: The “Bringme Cool”, a refrigerated locker module for the delivery of fresh products.

Happy Volcano – The winner of the Most Innovative Game award at the Indie Prize Awards, Happy Volcano, designs and develops digital entertainment products with a focus on video games. Founded in 2014, the company is well-positioned to develop games for all platforms, ranging from web to mobile, and desktop to console. Their crown jewel “The Almost Gone” is yet to be released, but the buzz is already huge.

Investsuite (founded in 2018) is a B2B2C ‘wealthtech’ startup that helps banks, brokers, wealth managers and other financial institutions serve their clients better. Investsuite offers a suite of modern digital investment solutions that can can be smoothly connected to their clients applications via their purposeful APIs. Having received investment in 2018 of €2 million, the startup plans to revolutionalize and digitise the asset and wealth management industry.

Sofitto (founded in 2016) describes itself as a “turnkey, all-in-one solution” enabling the world’s first complete payment scheme on blockchain rails. Its solutions cater to banks, merchants, governments, card scheme operators, crypo companies and individuals, including seamless integration with ATMs and POS terminals and a user-friendly blockchain wallet on a banking card. Sofitto has already raised €3 million and this next year aims to continue to facilitate the next-generation money ecosystem.

5 tips on surviving the crisis, from Europe’s startups