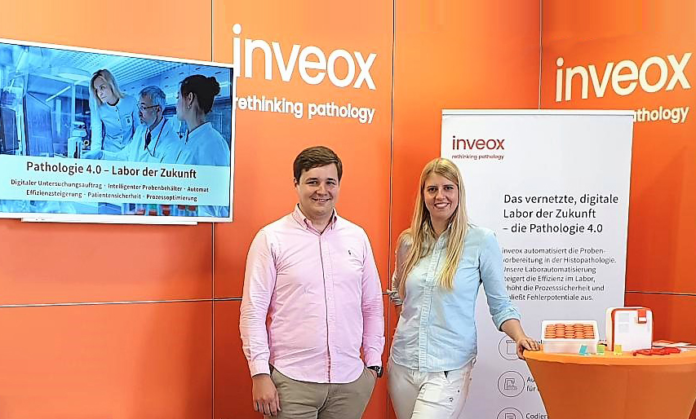 After a successful market entry in the DACH Region (Germany, Austria and Switzerland) and the opening of a subsidiary office in Krakow, Poland, inveox continues to grow. With its largest investment so far of €17 million, the Munich-based startup will begin the series-level production of their AI-supported automation system in order to make cancer diagnoses faster and more reliable. The names of the investors and participating business angels have not been shared with the press.

Founded in 2017, inveox started out to help people by significantly improving the reliability of cancer diagnoses. The founders want to bring concepts like digitalization, automation and artificial intelligence into the world of histopathology. These have the potential to enable faster and safer cancer diagnoses by enhancing the arrival and processing of tissue samples in a lab.

Four business angels believed in this vision, and in 2017 they supported the founders with an investment of €1 million. In the summer of 2018 there was a growth investment of €5 million from the same investors. To Managing Partner Dominik Sievert, the most recent investment means more than financial support. He stated: “The investors believe in us because inveox has displayed unprecedented strong growth in just a short time. They believe in our product, our leadership and our vision, and more importantly they provide us with an invaluable asset beyond the investment: mentoring.”

“My founding partner Dominik Sievert and I are very grateful that our investors put such great trust in us and our vision. Together we are working towards the goal of using our innovation capacities to develop technologies that can be put to serve people. We want to help lab technicians who give their best every day at labs and we want to ensure the safety of patients as well as the speed and reliability of the entire diagnostic process. That’s why we will use this further investment for our forthcoming series production and expansion into new markets,” says Managing Partner Maria Sievert.

Currently, the IoT/SaaS integral system – consisting of a lab automation machine, an intelligent sample container, and AI-enhanced software – is being implemented with several customers in the DACH region including well-known university clinics in Germany. The entry into further markets within and outside of Europe is planned for the later this year.

Basied in Munich, inveox develops systems to digitize, automate and connect pathology laboratories. The goal is to increase the safety and reliability of cancer diagnoses while simultaneously improving the efficiency and profitability of labs as well as unlocking the potential for personalized diagnostics driven by big data and artificial intelligence.

Since its founding, inveox has won numerous awards and been part of several accelerators of renowned companies, such as “Digital Health”  (Roche Diagnostics / Plug&Play), EIT Health, and the upcoming Texas Medical Center Accelerator 2019 in Houston, Texas.