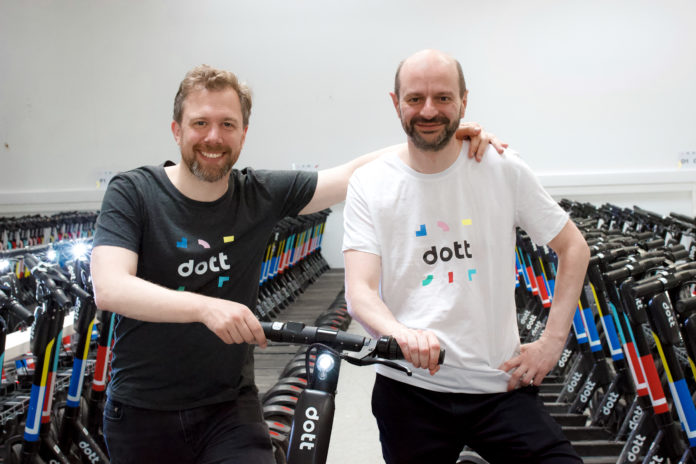 Amsterdam-based Dott, the European micro-mobility company has raised a €30 million Series A funding round to fund the production and market launch of its new e-bikes and e-scooters to replace cars in urban centres. The investment was co-led by existing investors EQT Ventures, and the South African multinational Naspers with participation from Axel Springer Digital Ventures, Felix Capital, FJ Labs, U-Start Club, and angel investors.

Just founded in 2018, the startup previously raised a €20 million round in December, and we just featured it as one of our 10 mobility startups to watch in 2019. Dott’s scooters are built to last and be safer than other e-scooters on the market. They can run for several kilometers without running out of juice, have bigger wheels, reliable road grip, and a double brake system.

The funding will be used to accelerate the market launch of Dott’s custom-designed products. Dott has already completed the design of its e-bikes, and pre-production is in progress. Mostly produced in Europe and assembled in France, Dott’s e-bike will be launched within months in cities in Germany, the UK, and the Netherlands, while the startup’s e-scooters will be available by the end of the year.

Dott is currently operating in Brussels, Paris and Lyon, along with a pilot in Milan. Along with a strong collaboration with municipalities and local mobility ecosystems, Dott’s scooters are designed to be sustainable, with swappable batteries and a commitment to repair scooters instead of replacing them.

Dott is also the first company to offer comprehensive insurance coverage to its users in France and Belgium (coming soon in Italy) in partnership with the insurtech startup Zego and La Parisienne Assurances. This insurance covers both personal injury and third-party liability. The insurance is automatically integrated in the sign-up process for new riders and before the next trips for existing riders, with no additional cost.

“We’ve shown in the first months that we can offer a true alternative in European cities, taking the lead both in terms of sustainability and best user experience,” said Maxim Romain, CEO and co-founder of Dott. “We think we have a winning combination now, starting with our great results in Paris, along with scooters designed for shared mobility and fully integrated operations from start. Our aim is now to accelerate, take the full lead in cities where we operate, expand to new countries and launch our own Dott e-bike as well as the two next generations of e-scooters in the coming months.”

“The dense nature of cities in Europe is ideal for e-scooter and e-bike sharing for short commutes – most trips are much more efficiently covered than with a car,” said Martin Tschopp, COO of Naspers Ventures. “Dott has experienced good traction in its first few months of operation and is leading with a local, sustainable and safety-first mindset, which is appealing to Naspers.”