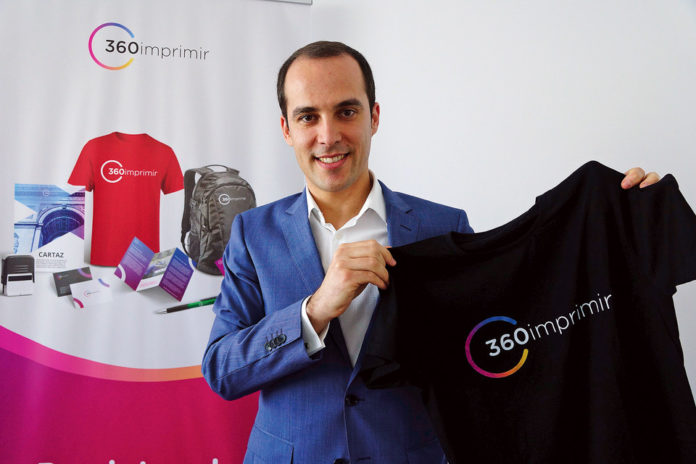 In the summer of 2011, Sérgio Vieira was going to have lunch with Jorge Correia, from the Instituto Universitário de Lisboa, when Correia asked him to come to Staples with him to print his master’s thesis.

“I noticed that each copy cost between €.50 cents and €1, but above two thousand copies, it was only four cents. The scale brought enormous efficiency,” said Vieira, who told his friend, “If you combined the theses of your colleagues, everyone would save money.”

Together, Vieira and Correia began to wonder whether printers would be interested in aggregating individual orders, but were told that it was impossible. Until one day Vieira asked, “I just want you to tell me how much it costs to print 500 sheets of these.” The answer was encouraging: €300 for 121 documents. “Dividing the price by 121 customers, we reduced the price to less than €3.” They had discovered a business opportunity.

Today 360imprimir employs over 170 people, using software to collect and aggregate orders from various customers, enabling them to “sell 500 business cards for about €10”. Founded in 2013 by Sérgio Vieira, Jorge Correia, José Salgado, João Matias, Pedro Gaspar and Diogo Silva, the startup, based in Torres Vedras, has an average of 4,000 orders per day, and has now closed an €18 million Series B round – one of the largest in Portuguese history.

The round was led by LeadX, along with the Portuguese venture capital Pathena and existing investor Omnes Capital, as well as state financing. Following the round, the six founders retain 48% of the total capital.

The funding will be used to expand geographically, as well as expand its range of products. Until now the startup has been present in Portugal, Spain, Brazil, and Mexico, and is now expanding into the USA, Canada, and 15 European countries.

By the way: If you’re interested to join a fast-growing startup like 360imprimir, make sure to check out the EU-Startups Job Board.