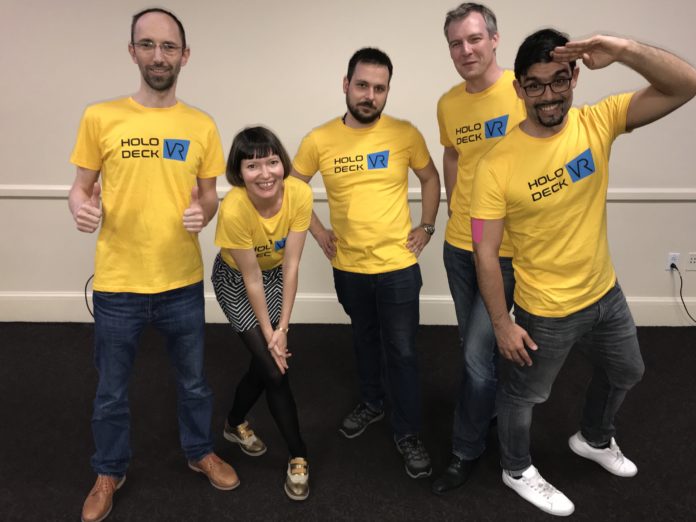 Munich-based startup Holodeck VR has developed socially and physically engaging VR, which allows users to experience virtual reality in groups of up to 20 people, moving around in an empty space of 10×20 metres wearing VR goggles.

Holodeck VR’s experiences combine the real world and digital world seamlessly, letting people move around physical environments; for instance, walking or taking a ride in bumper cars or on a rollercoaster – while exploring new virtual worlds, where they can play an active part in adventures and experience new, even impossible, things and places, as well as offering a flexible solution for industries such as eSports and tourism. The startup plans to release several new experiences each year at its special locations.

Founded in 2016 as a spin-off from the Fraunhofer Institute for Integrated Ciruits IIS, Holodeck VR has just received a seven-figure investment from ProSiebenSat.1. The funds will be used for Holodeck to expand its platform and its network of locations.

Owners and operators of a Holodeck can use its multi-user, scalable VR technology for all different types of events – from birthday parties to corporate team building – to provide novel, fun experiences to potentially thousands of users daily. Holodeck VR is actively looking for partnerships with new location owners and operators seeking to convert their empty spaces into new interactive Holodecks for their visitors.

Holodeck VR will benefit from multiple opportunities within the ProSiebenSat.1 network. With its “Jochen Schweizer mydays Group”, the Munich-based media company owns a potential distribution channel for scaling Holodeck VR locations at leisure and activity parks, as well as opportunities such as live broadcasting and VR content generation.

“We are thrilled that ProSiebenSat.1 believes in Holodeck VR and can help us scale in exciting areas,” said Jonathan Nowak Delgado, co-founder and managing director of Holodeck VR. “With this investment we’ll aim to become the VR touchpoint for the next generation by offering exciting new experiences that are simple, social, and fun. We are growing, so come & join the Holodeck VR team.”

“Besides believing in the technology and Holodeck VR, this is also an investment in an exciting and innovative growth market,” said Eun-Kyung Park, Chief Digital Officer Entertainment at ProSiebenSat.1. “VR applications based on outstanding technology have the potential to excite the audience with totally new formats of interactive entertainment.“