Harvesting flies for protein: Hexafly secures another €1.1 million to feed fish and livestock 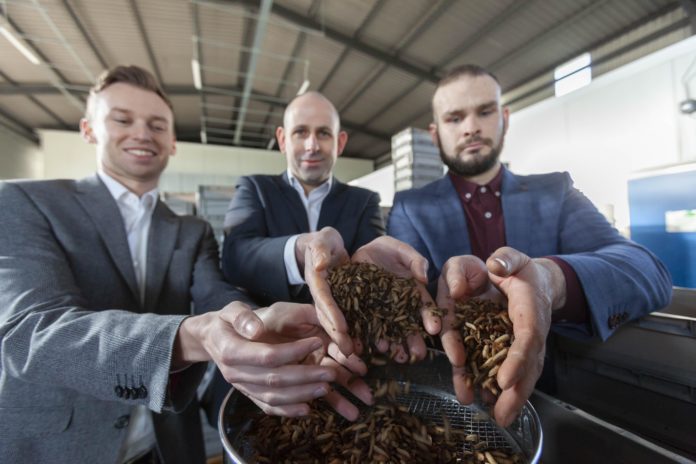 Revolutionising food for plants and livestock, Hexafly is one of the latest agtech statups harvesting insects. Based in Meath, Ireland, this agritech company is farming insects to feed fish, fertilise plants, and enhance medicines and food with its proteins. The startup has just raised a €1.1 million seed round, after closing a round of €1.1 million in February 2018, bringing the total raised by the company to €3.5 million.

Hexafly was established in 2016 by Alvan Hunt and John Lynam in response to the growing issue of global food shortages. The founders developed a method of sustainable insect farming that converts low value waste streams – namely, black soldier flies – into high-value feeds, fertilizers and bioplastics. Hexafly supplies these insect-derived products to a range of companies in the aqua and animal feed, medical, cosmetic, food and plant nutrition industries.

“Before we set up Hexafly, John and I knew that we wanted to start a company that would tackle a global issue, while being sustainable,” said Alvan Hunt, CEO and co-founder of Hexafly. “We are proud to say that Hexafly is a zero-waste operation – we take in low value waste streams and convert them to insect-derived oil, protein powder, fertilizer and a high-value bio-polymer called chitin for use in various industries.

The investment includes €900k in angel funding, with Enterprise Ireland, SOS Ventures, Yield Lab and Cedas Foundation making up the rest of the two rounds. It is the largest HBAN (Halo Business Angel Network) angel investment in agritech to date, and will help to fund 50 new jobs over the next two years, as well as to expand to a larger production facility. Hexafly will also use the investment to further expand its reach in international markets including Europe, the US and Asia.

Originally, Hexafly set up a pilot plant in Meath before establishing a large commercial plant in early 2018. With more than 90% of its insect-based products exported and growing demand in the far East and US, the company is planning to pursue a €10 million Series A round in 2019 to facilitate the construction of a much larger production facility.

“Hexafly is a really innovative company with huge promise. Although the company already has very strong export levels, there are other vast markets, including Asia and the US, that offer expansion possibilities,” said Julian Seymour, syndicates manager at HBAN. “Alvan and John are visionary entrepreneurs; they sought to tackle a global issue by developing an alternative protein source. The investment in Hexafly is significant and highlights the high-potential of these types of sustainable companies.”