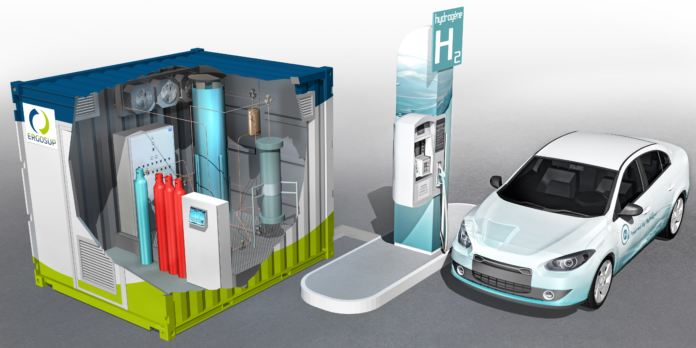 As the lightest yet most energy-dense of all elements, hydrogen is the ultimate energy carrier. It is completely harmless to the environment, producing only water and heat when used in fuel cells for supplying electrical power.

The French startup Ergosup has developed a unique high pressure hydrogen generator technology based on water electrolysis technology, and is developing solutions for the storage and converstion of electricity into pressurised hydrogen, creating compact hydrogen fueling stations. The stations are primarily being developed for mobility solutions, however the startup is working on other applications as well. After raising €2.7 million in 2015, the Ergosup has just raised another round of €11 million.

Ergosup will use the new capital to industrialise the production of its compact storage units, invest in marketing, and strengthen its teams with the recruitment of a dozen new employees, including salespeople, project managers, and technicians.

“Whereas today 95% of hydrogen is produced from fossil fuels, and less than 0.01% by water electrolysis, the objective set by the Hulot plan of June 2018 is to to reach a percentage of decarbonated hydrogen of 10% in 2023, and 40% in 2028. This French plan is part of an ambitious international agenda in which hydrogen will be used everywhere; with industrialists who invest, territories that engage, and applications that unfold,” the company said in a statement.

The first market targeted by Ergosup is zero-emission mobility with different types of hydrogen-powered electric vehicles such as drones, handling equipment, bicycles, and cars, as well as on-site industrial gas production as a substitute for truck-based supplies.

Share
Facebook
Twitter
WhatsApp
Linkedin
Previous article
Berlin-based startup Mambu raises €30 million for its SaaS platform to power fintechs
Next article
Apply now to join the finals of our big Pitch Competition at the EU-Startups Summit on May 2-3 in Barcelona!