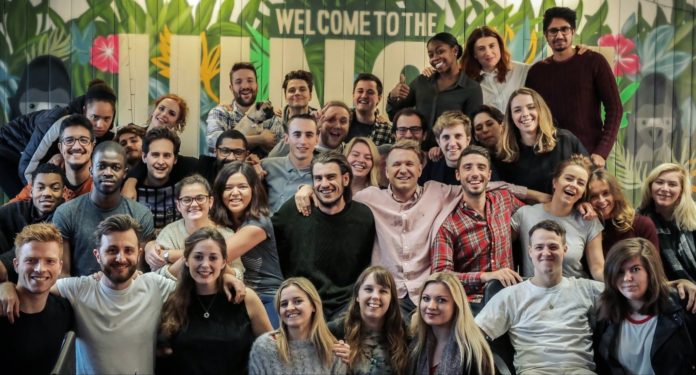 Social media has completely changed the world of advertising. London-based Jungle Creations is a part of that change, specialising in the creation of digital, social media content for brands. The startup has just raised €3.4 million in a Series A funding round led by Edge Investments, showing the growing confidence in ‘new media’ brands and their ability to engage global audiences at scale in the wake of the rise of Internet giants Google and Facebook.

Founded by serial entrepreneur Jamie Bolding in 2014, Jungle Creations started by creating and commercialing food, beauty and lifestyle channels for Facebook, including VT and Twisted, collecting over 85 million followers.

Jungle Creations’ in-house creative and production agency, ‘Treehouse’, has since gone on to conceptualise and distribute social media video content for some of the world’s biggest  brands including Heinz, McDonald’s and Virgin, generating over 1.3 billion views.

Jungle Creations will use the funding to grow its existing offices in New York, Los Angeles, and Toronto. The funding will also enable the startup to build on its success as a content creator, with plans to focus its attention towards longer form content, such as short documentaries and TV mini-series.

The funding from Edge will also help Jungle Creations to continue to diversify its offering – from launching the e-commerce site Lovimals.com, to devising restaurant concepts, pop-up bars and cookbooks, inspired by the success of its popular food and drink brand Twisted. The company has amassed £10 million in revenue since its launch, and plans to hit £100 million in FY 2021.

Jamie Bolding, founder and CEO of Jungle Creations, said: “At a time when many media companies and brands have struggled to navigate the growing influence of the Google-Facebook duopoly, our deep understanding of social media, marketing and content creation has been instrumental in the company’s success. This has directly enabled us to branch out into new avenues, from ecommerce, to running events and launching our own influencer agency. It’s an exciting time of growth for the company and this funding from Edge reflects confidence in our ability to engage global audiences at scale.”

David Glick, Founder and CEO of Edge Investments, said: “Jungle Creations produces and distributes viral entertainment videos, generating billions of views from its millions of social media followers, and monetises these via sponsorship and advertising. It is led by a first-rate innovative management team and growing extremely quickly – exactly the kind of talent-led, creative business we like to back and work with at Edge Investments.”