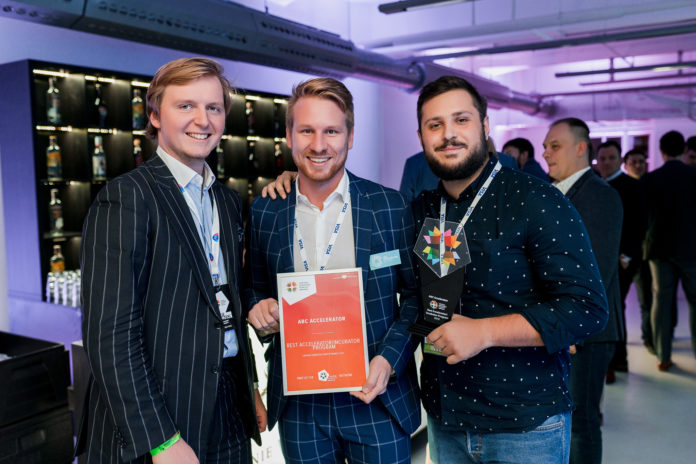 The renown ABC Accelerator has been awarded as the best startup accelerator program in the CEE region by CESA (Central European Startup Awards) for the 2nd year in a row. The CESA awards Grand Finale day, on October 24 in Warsaw, celebrated the startup ecosystem of the colorful Central and Eastern Europe region, and brought the Slovenian ABC Accelerator another laurel in its ever expanding collection.

ABC’s acceleration program is mentorship-driven and empowers startups and scaleups to foster the growth of their innovative companies by providing tools, resources, connections, knowledge and expertise. Startups, this is your chance: The ABC Accelerator is now accepting applications for their next batch, the 2019 program, until the 17th of December. Hurry Up and Apply now!

Due to cross-border acceleration, global expansion and strong investors’ network, ABC has become the go-to accelerator for startups in the region who wish to secure funding, optimize their business and prepare for a fast sales growth!

This award comes at the most opportune of times, because ABC has just started accepting applications for the next chapter of their program, the #8 BATCH 2019, which will begin in January next year. Even though the program already has an impressive history – almost 130 startups accelerated since 2015, more than €30 million raised, and a vast pan-European network of partners – this newest recognition of their quality should be a clear sign to all interested startups that ABC Accelerator is where they want to be.

Not only can startups expect professional yet personal approach, furthermore, their in-house VC fund ABC First Growth invests up to €250,000 after the acceleration and cross-border acceleration with access to vast pan-European network. They will also learn from the very best in business how to realize their potential to the fullest and introduce their solutions to the world. ABC has already produced success stories, with some of its startups recently raising sizable Series A rounds.

ABC has brought aboard experts from renowned entities such as Google, as well as international investors and door openers in the global market. As a result of such stellar staff, participants in ABC’s program have already left an important mark in the business world. The new program is focusing on finding a strategic fit between startups and partners, granting them competitive advantage with cross-acceleration in local markets and global expansion through their partnership network. To that end they are looking for startups with business traction, early revenue, the winning formula to scale, and a motivated and dedicated team.

With that in mind, ABC is inviting ambitious companies to apply and experience how the award-winning program can help them shape their startup’s future success. Hurry up and apply now for the 2019 program now!

Share
Facebook
Twitter
WhatsApp
Linkedin
Previous article
Europe is on the rise as a global investment destination, according to new survey
Next article
Overview of 10 state-of-the-art co-working spaces in Zurich