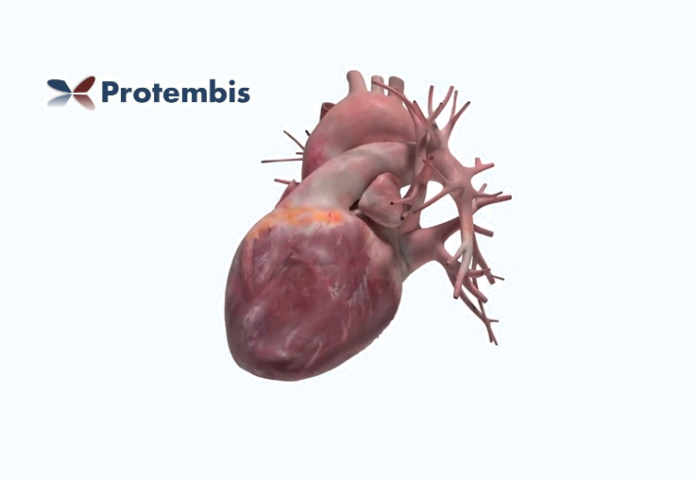 Founded in 2013, Protembis is developing an innovative cerebral protection system that is designed to minimize the risk of stroke and other neurological injury, particularly during catheter-based heart valve implantations. With the fresh capital, the Protembis team expects to bring its product to market maturity.

Protembis has developed the “ProtEmbo Cerebral Protection System” – also called the “ProtEmbo” – to minimize the risk of stroke and other neurological injury in heart valve interventions. Nowadays, the calcified native aortic valve can be replaced by an artificial heart valve, which is advanced via a catheter into the left ventricle, i.e. to the site of the calcified native valve. This procedure is called transcatheter aortic valve implantation (also called “TAVI” or “TAVR”). The heart valve prosthesis is opened, presses the old and defective native valve against the vessel wall and thus takes over its function. TAVI is a quicker and less invasive procedure and is conducted while the heart is beating; it is associated with less pain and a shorter hospital stay than the alternative open-heart surgery.

In both methods, however, there is a risk that calcific debris from the native heart valve or aorta is detached and then migrates to the brain via the bloodstream, where it can cause stroke or other neurological complications. The drugs used before, during and 2 / 3 shortly after the heart valve procedure do not provide complete protection against this risk.

The Protembis team wants to minimize this risk with its novel device. The ProtEmbo is a catheterbased filter device which is advanced intuitively, safely and quickly via the radial artery of the left arm before the start of a TAVI procedure and removed again at the end of the procedure in order to prevent the migration of particles to the brain. The permeable material of the filter covers all arteries leading to the brain while allowing free passage of blood cells and blocking even the smallest embolic particles. The filter is coated with heparin to prevent it from clotting during the procedure, as well as prevent thrombus formation on the filter surface.

Dr. Thorsten Siess, Chief Technology Officer at Abiomed, stated: “Patient safety should always be our top priority. We see great potential in Protembis’ technology to make TAVI neurologically safer and thus enable TAVI to be used in an even larger patient population.”

“We see enormous potential for Protembis in this rapidly growing market segment, due to the demographic development and the associated increase in the number of minimally invasive heart valve interventions – and concomitant cerebral protection procedures,” commented Markus Krückemeier, Managing Director of the management company of Seed Fonds III.

Thomas Ohr
Thomas Ohr is the "Editor in Chief" of EU-Startups.com and started the blog in October 2010. He is excited about Europe's future, passionate about new business ideas and lives in Barcelona (Spain).
RELATED ARTICLES
Greece-Startups