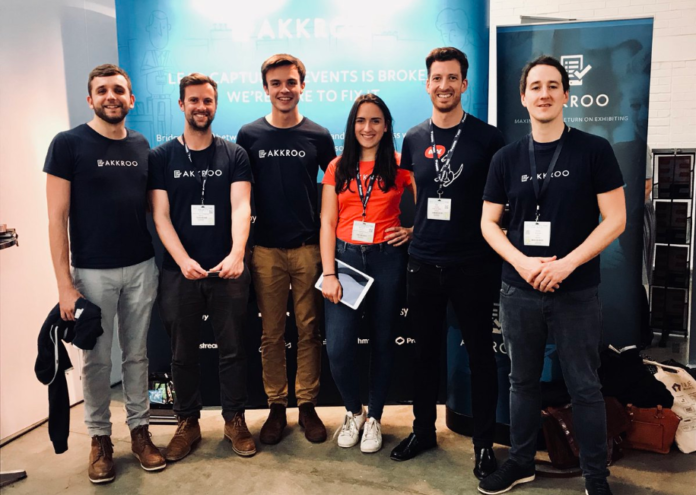 London/Brixton-based event lead capture company Akkroo has closed a £1.75 million funding round led by Conviction Investment Partners (CIP), with participation from previous private investors. This raise forms the first part of Akkroo’s Series A round and the business will have access to further capital of an equal or greater amount in 12 months time. Akkroo will use the funds to increase its marketing activities and significantly expand its US operations.

Founded in 2013 as a spin-out from RMP Enterprise, Akkroo enables sales and marketing teams to transform the way they capture, process and evaluate leads from exhibiting at events. It already has a global customer base across a wide range of verticals, including the likes of IBM, Sony, Getinge AB and PayPal. Unlike other event technology providers, Akkroo provides a ‘horizontal’ solution, aimed specifically at the organisations exhibiting at events, rather than the event organisers themselves.

The young company solves a common pain point for enterprise businesses – how to ensure leads captured at events are recorded, qualified and processed efficiently, and how to prove the overall ROI of exhibiting, budget for which can often run into the tens or hundreds of millions of dollars. Using Akkroo means that companies have access to detailed data on both the value of exhibiting, and the performance of event teams on the ground. It also means companies can plan and allocate their upcoming event expenditure based on clear Akkroo data from past events.

With over $500bn spent on B2B events in 2017, the solution is primarily designed for industries where trade shows are an integral part of the sales process, and Akkroo has an exceptionally strong client base in the medical devices and life sciences industry. In many cases, Akkroo replaces entirely offline processes, with event leads traditionally captured by pen and paper on clipboards, or from business card ‘fishbowls’.

Akkroo has been on a significant growth trajectory over the past years, more than doubling annual recurring revenue in the past two years and has recently moved to new headquarters in Brixton, south London to house its growing team. The young company has previously raised £150k in a small seed round in 2013, and £550k in a larger seed round in 2016. The business has been cash generative for a number of years.

Chris Wickson, co-founder and CEO of Akkroo, said: “This funding comes at a time of significant growth for Akkroo as we expand and develop our product in this emerging space, and seize the vast opportunities in both the European and US markets.

He continued explaining: “There is a huge disconnect between the manual, outdated activities that are used for lead capture when regularly exhibiting and an organisation’s existing, often sophisticated, sales and marketing systems. Businesses have long struggled with how to capture and process leads at events efficiently, follow up with those leads in a timely manner and ultimately evaluate the true ROI of exhibiting. What’s more, GDPR means that data collected and processed from events in a responsible manner is more important than ever. Akkroo is at the forefront of bridging this disconnect, solving a significant challenge that impacts sales and marketing teams all over the world. Our solution not only enables teams to win more business from events but also provides intelligence that ensures they’re exhibiting at the right events, at the right time.”

Shaping the future of the metaverse: A panel discussion with Hiber, Vault Hill and Volkswagen Group

weGrow Co-Founder & CEO Gernot Schwendtner will speak at the EU-Startups Summit on May 12-13 in Barcelona!