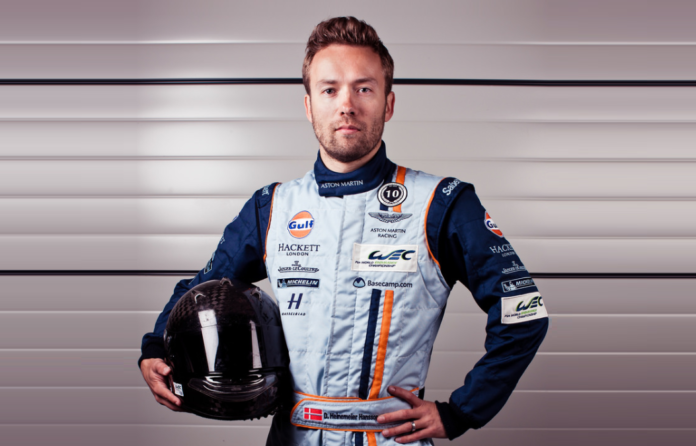 David Heinemeier Hansson is a Danish programmer, entrepreneur and the creator of the popular Ruby on Rails web development framework. He is also co-founder and CTO at the at the highly successful software development firm Basecamp (formerly 37 Signals). Hansson co-wrote the books “Agile Web Development with Rails”, “Getting Real”, and the best-selling business books “Rework” and “Remote”. In his leisure time time, David is a Le Mans & WEC class-winning racing car driver.

I was following David’s path and blog posts, ever since listening to his talk at Startup School 2008, which I descovered at around 2010 on Youtube. This week, I finally had the opportunity of doing an exclusive interview with him:

You’re originally from Copenhagen, where you also started your entrepreneurial career. Today you spend most of your time in Malibu, Marbella and Chicago. What made you leave Copenhagen back in the days and did you ever thought about coming back?

Copenhagen is a wonderful city, at least until the sun sets for the winter and doesn’t reappear until the spring! But I had spent 25 years of my life there by the time I moved to Chicago to join Basecamp in person. That felt like plenty. I still visit every year, but I’ve found that my life is simply better when it includes large amounts of daily sunshine. And since Basecamp is a remote business, I’ve chosen to live in places that suit that disposition all year round. So it’s all lifestyle reasons, not business reasons. I could just as well do what I do from Copenhagen as I could from Malibu, Marbella, or Chicago. And in fact used to do just that! Basecamp was built, launched, and reached escape velocity while I was living and working in Copenhagen.

You’re known to be the creator of the programming language Ruby on Rails, founder of Basecamp, best-selling author of books REWORK and REMOTE, and last but not least you’re a race car driver. Which of these endeavors has been the most profitable one for you so far and which one is the most fun?

I made all my money creating and running Basecamp. Spending time writing books, open-source software, or driving race cars is how I’ve spent the spoils, not earned them! But as far as fun goes, it’s the composition, not any individual piece, that makes me happy. I wouldn’t want to be a full-time race car driver or author. But having those pursuits be part of a balanced, fulfilled life that also includes running a business and writing software is the ideal for me. I do not ascribe to the singular focus so many seems to believe is a requirement for greatness. I have no interest in being THE VERY BEST at one particular activity. I’m beyond content being THE VERY BEST ME, which is a mosaic of interests and pursuits.

In a conversation with Cason Calacanis in 2010 you said that chances are high that Basecamp (formerly 37 Signals) was the best business idea/project you will have ever had in your live. Did you come across another, potentially better business idea, in the recent years, or do you still think it might be the case that you’ll be working on Basecamp till the end of your professional career?

Basecamp remains the best business idea that Jason and I have ever had. We’ve had some other big hits as well, like Highrise, but Basecamp towers above them all. I have no regrets or reservations about that. All entrepreneurs will by definition have one of the business ideas be the best. But I find that too many fear that they might have found that success too early and somehow get insecure about not being a successful “serial entrepreneur”. I think that’s utterly overrated. Count your blessings if you stumble across an idea that you happened to execute at the right time such that success is granted upon you.

Now, I’ll continue to explore new ideas with Jason. In fact, we’re working on a new idea right now, but it’s not with any aspirations that this idea has to beat or surpass Basecamp. Odds are that it won’t! Basecamp is phenomenally successful, and odds are that we will never recreate that success in a different venture. But that’s no reason to stop creating or to feel bad.

If basecamp would ever end up in bankruptcy – for whatever reason – and you would want to start another company… What would you do and which mistakes of the past would you try to avoid?

I’ve prepared for the violent implosion of Basecamp since the earliest days of the business. And I still do! When I do my personal accounting, I never even include the valuation of Basecamp in those numbers. I know how fleetly success can be. The world is full of business people who thought their castle could never be besieged, only to find it reduced to rubble a few years later. I hope that won’t happen, but I don’t fear it and have prepared mentally for it.

But when I look back at Basecamp, I have virtually no regrets. I don’t really believe in regrets much. As a student of Stoicism, I’ve come to accept all the good and the bad as part of the path to get where I am. I wouldn’t be who or where I am without trials and struggles. The worst path to take is one completely free of tribulations or challenges. The worst life lived is one completely free of hardship or heartbreak. We have to struggle to appreciate. That goes for business as it does for life.

Now, that’s of course pretty easy for me to say, since things, especially from afar, looks like they all turned out perfectly. And there’s truth to that. But you suffer from a lack of imagination if you can’t imagine that successful or wealthy people struggling with life, disappointment, loss, and anguish too. Because everyone does. The highlight reel that I present through achievements or on Instagram isn’t close to the full story.

In the past you’ve argued openly against taking venture capital as a startup and against chasing the unicorn dream. Do you feel the startup scene in the US has changed and the mindset of tech entrepreneurs is slowly shifting towards a bootstrapping approach and a more down to earth mentality?

I think the US startup ecosystem is still hopelessly trapped in an infatuation with rapid growth, unicorns, and billion-dollar deals. I don’t think anything we’ve advocated for over the years have had any structural impact on those ambitions. But I do have anecdotal reminders that there are individuals who Jason and I have reached through our writings and example who reconsidered and took a different path. That’s rewarding enough.

I also think there’s a general political reckoning brewing around income inequality and quality of life in general in the US that may in time bring that structural change. There are glimmers of hope in an otherwise dim and depressing political scene with success of people like Alexandria Ocasio-Cortez. Whether that turns out to be just a flicker or an actual flame, who knows. But if it does spread, I think it’d be foolish to think that the tech world would be immune to a change in societal values.

What would you say are the biggest differences between the US and the European startup ecosystem? What is missing in Europe in order that we’ll potentially also see a European Google, Facebook or Apple in the future?

I wouldn’t wish a native Google or, especially, Facebook on Europe. Much of the American monopolist tech world is a cautionary tale, not an inviting one. Europe should aspire to better ideals built on stronger foundations. Not lust after a me-too Silicon Valley that can push the same ad-based privacy hell upon even more people. In fact, I think Europe has much to be proud about. GDPR is a recent example. It’s indicative of where we currently are that such regulation at a federal level is unthinkable in the US right now, but thankfully we have Europe leading the way.

More than anything, I’d wish that European entrepreneurs would shed their inferiority complex. Stop lusting for the Silicon Valley model. Stop lusting for unicorns and billion-dollar VC injections. Embrace an alternative model based on constraints and different ethics. Light the beacon of hope, decency, and inclusion that the American model was supposed to give us but failed to.

You’re not only a founder, coder, author and race car driver, but also a husband and father. How do you manage all this? Can you tell us how your usual day looks like, and potentially share any productivity/efficiency advice?

I manage my time by embracing constraints. I’ve always worked 40 hours or less per week, which leaves a surprising amount of time left over for the rest of life! I’ve always taken plenty of vacations, which are now so much better with family. As far as hobbies do, I do them intensely, but in short bursts. I’ll go to the race track for a weekend and give it my all, but then not really think of racing come Monday. I’ll spend a few months writing a new book, but then not worry about all the programming that doesn’t get done during that time. The book writing will finish, and I’ll return to writing code. Life and work has seasons. We can’t do all the things all the time. Letting some aspects hibernate from time to time is healthy, and, in fact, necessary to remain sane.

I very rarely feel stressed or overworked. Sure, there’s the occasional crunch that might last for a few days, but then life and work returns to a rhythm that’s managed by sustainable habits and aspirations. There are far more days where I under-burdened than those where I feel over-burdened. And this isn’t because I have some secret trick or formula for cramming in more work in less time than everyone else. If anything, it’s because I realize that most work needn’t be done right now or at all. That there’s always another day. And that even if it doesn’t seem like I get that much done in a single week, I’m still very content with my achievements when I look back over the long term.

In order to hear about other interesting entrepreneurial stories, interviews, tech events and funding opportunities, please make sure to also subscribe to our weekly newsletter.

Why your startup needs more time, than money

“Don’t wait around for a mentor to find you”: Interview with the CEO of Code First Girls, Anna Brailsford