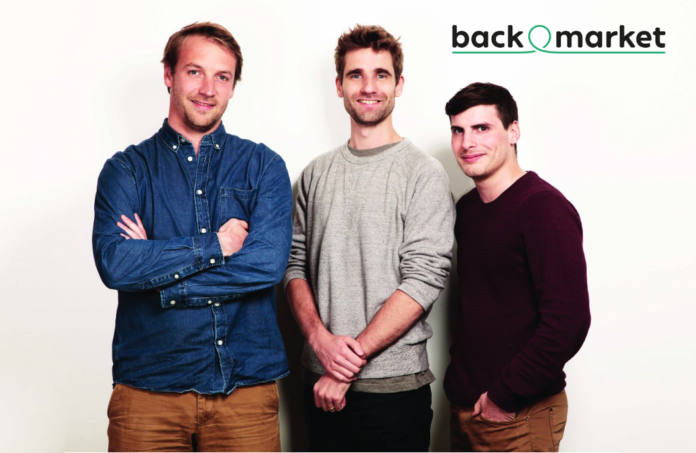 Following three successful years in the market, the Paris-based ecommerce startup Back Market has raised €41 million in its second round of funding. The funding round was backed by Europe’s leading venture capital firms including Groupe Arnault, Eurazeo, Aglaé Ventures and Daphni. This round follows the initial funding which closed at €7 million in May 2017 and was backed by Daphni and Aglaé Ventures.

Founded in 2014, Back Market is the first marketplace which is exclusively dedicated to refurbished electronic devices and appliances including smartphones, tablets, laptops, televisions, hi-fi equipment, game consoles, household appliances, and other products.

On Back Market, consumers can purchase devices directly from certified refurbishing factories, distributors and big-name brands. The devices come repaired and have warranties which meet the strict standards of Back Market’s quality charter. Consumers have access to an ever-growing catalogue of products that are priced 30 to 70% lower than the current market price. They may also sell devices that they no longer use through the platform.

After becoming one of the market leaders in Europe, Back Market further expanded its capabilities and launched in the United States earlier this year. Today, Back Market employs a team of around 100 people across its offices in Paris, Bordeaux, and New York. The company is looking to expand its teams in France and abroad and intends to recruit several dozen developers before the end of the year.

With a global market estimated to be worth over €50bn, with smartphones making up €22bn, refurbished devices are increasingly gaining market share. This is especially evident in the smartphone segment, where the refurbished market grew by 13% in 2017 as compared to the 3% growth of new smartphones during the same period.

Back Market’s goal is to build on this trend and turn “refurbished” into an essential mode of consumption for the mainstream market. The company also aims to play a key role in addressing an urgent environmental challenge given humans produced more than 44.7 million tons of e-waste (electrical and electronic equipment waste) in 2016 alone.

Thibaud Hug de Larauze, CEO and co-founder of Back Market commented: “This fundraising is a signal of maturity not only for Back Market, but also for the rapidly expanding refurbished market. Our goal is to create a true global brand, with a name that is synonymous with the word ‘refurbished.’ Global leadership in this area is here for the taking, and speed is imperative. This funding makes it possible for us to rise to the challenge.”

Pierre-Yves Meerschman, Partner and Co-Founder, Daphni, stated: “Back Market brings an innovative approach to addressing a real market need and is well positioned to take advantage of a tremendous market opportunity in the refurbished goods space. We are proud to be partnering with a company that not only holds a leading position in its sector but one with an impressive approach to social and corporate responsibility.”

Share
Facebook
Twitter
WhatsApp
Linkedin
Previous article
Crowdinvesting: Start angel investing with Envestio – even with a small budget (Sponsored)
Next article
New satellite navigation ideas are awarded with prizes worth over €1 million in the ESNC (Sponsored)