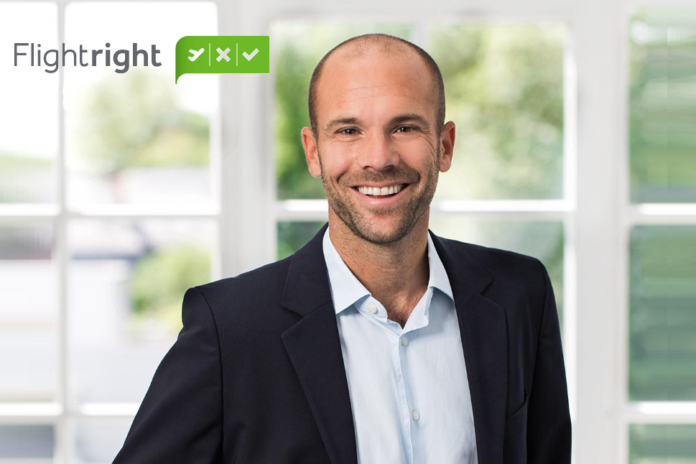 Founded in 2010 in Potsdam, Germany, Flightright was already used by more than 2,200,000 consumers, which makes the company the #1 platform for air passenger rights. Flightright helps consumers to get their rightful compensation from an airlines when their flights have been delayed, cancelled or overbooked according to the EU Regulation No 261/2004. As a fast growing and internationally operating company, Flightright already looks back at more than €100.000.000 in enforced compensations to customers, growth from scratch to over 100 employees and 18 nationalities.

To learn more about Flightright and the market they are operating in, we recently did an interview with Flightright Co-founder Dr. Philipp Kadelbach.

Philipp, please give us a short introduction to Flightright and how it all started.

Flightright is the market leader for helping travellers with their fight for compensation against airlines. We started eight years ago back in 2010 after I had a delayed flight that almost cost me my own wedding. I couldn’t wait five hours at the airport for my flight, so I had to book another one. That was when I found out that a valid claim for compensation not necessarily means being paid by the airline. My co-founder and I felt that it was time for a state-of-the-art, online-based legal tech service and the idea for Flightright was born. Eight years later we still fight against the airlines – but today we are hundred people working at Flightright with a 99% success rate in court and more than 150 million Euro paid out for compensation.

Earlier this month, the Court of Justice of the European Union ruled that an airline which operated only the first leg of a connecting flight in one Member State can be sued before the courts of the final destination in another Member State for compensation for delays. What does this mean for airline passengers and Flightright customers?

This was another partial victory for European passengers with delayed or cancelled flights. Before this court decision, airlines argued regularly in such cases that consumers had to sue airlines in the airlines home country although they had booked a trip from or to their own home country. Imagine you want to sue someone and you have to do this in a Spanish court. Unless you don’t speak Spanish and don’t know the Spanish judicial system by chance – this means a hard disadvantage that many consumers were reasonably not willing to take. The decision of the Court of Justice of the European Union finally ended this.

This is an important court decision. What’s the background of the trial that involved Flightright and Air Nostrum and what impact do you except this decision to have in the long run?

There is certain kind of airline that systematically thwarts consumer rights. Since they know the consumer’s claim is valid, they love legal loopholes which make the enforcement of these claims more difficult. Until now one of the easiest loopholes for them was to hide in their respective countries, as I just described. This is especially true for some Spanish’ Airlines like Iberia/Air Nostrum and Vueling as well as some airlines from Turkey. It is our mission to fight these loopholes and hold airlines legally responsible. As such this court decision is not only important for its legal implication but is also a clear signal to these airlines that Flightright is willing and capable to fight to level the playing field.

Founded in 2010, Flightright is one of the pioneers in the field digital law services for passenger rights. What differentiates your company/solution from other service providers in that field and what makes it eventually more appealing?

As a consumer I would ask myself: Who is the best to fight for my claim? We started 2010 and back then, there was only one way to survive: to fight in court for the passenger’s compensation. We had to do this so often that it became our DNA. You won’t find any competitor or lawyer that fights harder or has a higher success rate than us. Therefore, we can win cases before the European Court of Justice. This is why we‘re the best choice for a customer who wants to push a claim for compensation against an airline.

Today Flightright is already operating in 8 different countries. Are you planning to expand in additional territories soon? Or are there other milestones that you currently prefer?

Despite all our success for our customers, especially in court: the fight against the airlines isn’t won yet. There are still a lot of battles to fight (and win) until consumers can regularly assume that airlines will pay their compensations. Besides enhancing our core product with new features, further internationalization is clearly in our roadmap. We are planning to add two countries each consecutive year. Our mission won’t be completed until airlines stop looking for the next loophole.