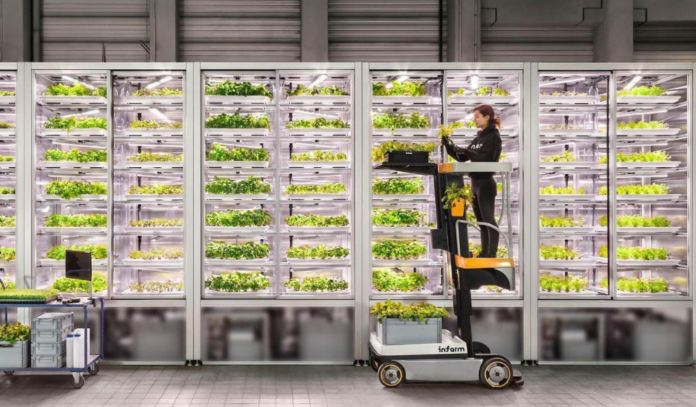 Infarm, Europe’s urban farming leader, today announces that it has raised €20 million in a Series A round led by Balderton Capital, alongside TriplePoint Capital,Mons Investments, Cherry Ventures, QUADIA and LocalGlobe. The round brings the total raised by Infarm to €24 million, which includes a €2 million grant awarded by the European Commission as part of the prestige Horizon 2020 program.

Only 2 years after introducing the concept of in-store farming to the world, Infarm is now operating more than 50 farms across Berlin in supermarket aisles, restaurants kitchens, and distribution warehouses. Infarm is headquartered in the German capital and was founded in 2013.

Erez Galonska, Co-Founder and CEO of Infarm, explained: “Rather than asking ourselves how to fix the deficiencies in the current supply chain, we wanted to redesign the entire chain from start to finish; Instead of building large-scale farms outside of the city, optimising on a specific yield, and then distributing the produce, we decided it would be more effective to distribute the farms themselves and farm directly where people live and eat.”

Infarm has integrated in-store farming into EDEKA and METRO locations, two of Germany’s largest food retailers, where it grows dozens of premium quality herbs and leafy greens, sold at affordable prices. With an output of up to 1,200 plants per month from a single farm unit (2 sqm) Infarm has already enabled some locations to become completely self-sufficient in their herb production.

The distributed farms are connected by Infarm’s central farming platform, creating a first of its kind urban farming network. Each farm is a controlled ecosystem with growing recipes that tailor light, temperature, pH, and nutrients to ensure the maximum natural expression of each plant.

Guy Galonska, Co-Founder and CTO, stated: “We collect 50,000 data points throughout a plant’s lifetime. Each farm acts as a data pipeline, sending information on plant growth to our platform 24/7 allowing it to learn, adjust, and optimise.”

Infarm can personalise its farms to each customer’s unique needs, growing different varieties for different supermarket locations or equalising the flavour of the produce to better suit the taste palate of a customer’s clientele. With a strong group of food retail and leading culinary partners, Infarm plans to grow its farming services beyond Berlin for the first time. It will launch operations in Paris, London, Copenhagen, and other German cities later this year.

Erez Galonska added: “This is the beginning of the urban farming (r)evolution: it will redefine what it means to eat well, reshape the landscape of cities, and re-empower the people to take ownership of their food. Our ambition is to reach cities as far as Seattle in the United States or Seoul, South Korea with our urban farming network.”

Today Infarm’s team is made up of close to 100 ‘Infarmers’ from disciplines such as horticulture, architecture, industrial design, marketing, and machine learning. The new investment will be used to grow Infarm’s team into a global operation and to further develop its 5,000 sqm R&D centre in Berlin. The centre focuses on the promotion of biodiversity and further expanding the company’s product assortment; tomatoes, chillies, a variety of mushrooms, fruits, and flowering vegetables are to be introduced next.

“We bring a world of choice right into your neighbourhood without having to compromise on quality, safety, and taste. Whether that be mint from Peru or an ice-plant from the sandy beaches of Jaffa, by eliminating the distance between farm and fork, we offer produce that has retained all of its nutrients and therefore, intense natural flavour.” stated Osnat Michaeli, Co-Founder and CMO.

Balderton Capital partner Daniel Waterhouse added: “Urban living is growing unrelentingly across the world and societies are at a point where they have to confront the big existential questions such as how to feed their growing populations sustainably. Infarm is right at the forefront of a new wave of companies setting out to tackle the inefficiencies in the current food supply chain by making it possible to grow fresh produce right in the heart of our communities. We are delighted to be backing a company whose mission we believe in so passionately.”