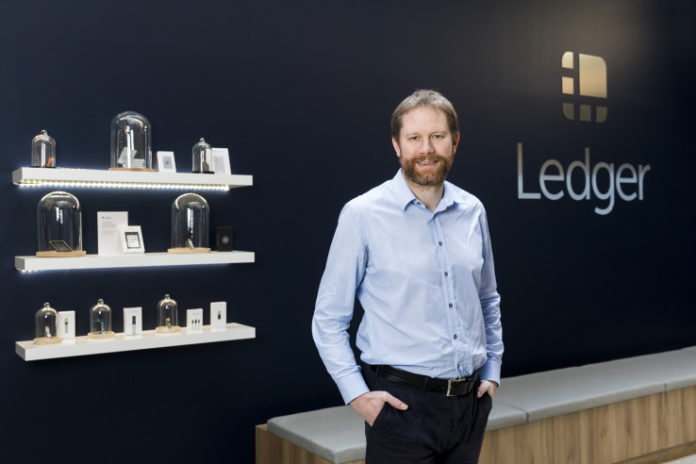 The cryptocurrency and blockchain security startup Ledger today announced a €61 million Series B round, led by Draper Esprit. The fresh capital will enable the company to scale up its operations as demand for their products keeps increasing.

The funding round was led by Draper Esprit, with additional funding from Draper Venture Network funds, including Draper Associates, Draper Dragon and Boost VC, as well as FirstMark Capital, Cathay Innovation, and Korelya Capital. It’s one of the largest traditional Series B investments into blockchain and cryptocurrency related technologies to date (excluding ICOs). Existing investors, CapHorn Invest, GDTRE and Digital Currency Group, also participated in the round.

Ledger was founded in 2014 by an ambitious team of eight entrepreneurs who saw the potential of blockchain technology to advance the way we live and that security would be the cornerstone of its long term success. The company has been growing at a fast pace since then and now employs 82 people in Paris, San Francisco and Vierzon.

The young company, which is already profitable, has sold over a million cryptocurrency hardware wallets across 165 countries. They are also launching a new solution for financial institutions, the Ledger Vault, enabling banks, hedge funds and family offices to manage their crypto assets.

All these products are underpinned by a unique technology: an Operating System (OS) specifically designed to run on any secure hardware and to support any cryptocurrency. This technology enables security for blockchain applications and will eventually accelerate advancement in a wide variety of industries, from the internet of things to driverless cars, where security prevents widespread adoption.

Eric Larchevêque, CEO at Ledger, explained: “We initially designed our Ledger hardware wallet as an enabler for the blockchain revolution. Three years later and with this Series B, we are reaching a significant milestone in our path to build a technological giant in the promising space of cryptocurrencies. These funds will be used to keep investing significantly in R&D while scaling our operations and deploying our teams globally. I am delighted to bring on board Draper Esprit and a truly global group of investors who will support the company as it grows rapidly.”

Simon Cook, CEO at Draper Esprit, commented: “Blockchain, as evidenced by crypto assets, is a truly revolutionary technology. Security will be paramount to its success and we believe that Ledger has built the world’s best security platform to manage private keys for all blockchain and crypto asset applications. This is a global company for a global industry and we have built an international syndicate through the Draper Network to support the team in their huge ambition.”

Tim Draper, Founder of DFJ, the Draper Network, and one the largest owner of Bitcoin, added: “Ledger creates security for cryptocurrency far beyond what I get from my bank. This is where people store money now. Ledger lets me take control of my currency rather than having to ask my bank. We’re seeing digital currency blossom across every continent and so several of the Draper Network funds, from Silicon Valley, Europe and Asia have come together to fund Ledger and help them expand globally.”