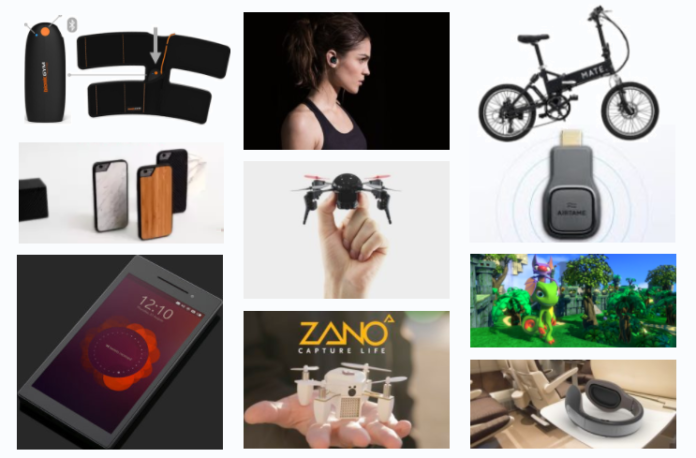 Since its inception, crowdfunding has been a pivotal part of creating new technology. Some companies use it as a means to test the market internationally and get early feedback, others to fund material and manufacturing costs and lately, more and more companies are usually crowd funding for a retail platform, selling goods that are closer to completion if not almost ready to be shipped. In looking at successful campaigns, it would appear that while earlier campaigns may have lacked the slickness of more recent efforts of stellar videos are PR managed trajectories, at least when it comes to Europe, they were able to make a lot more money. Let’s take a look:

Ubuntu Edge is the most successful crowdfunding campaign ever in terms of a funding round that failed to reach its target ($32m).The Edge was designed as a hybrid device, which would function as a high-end smartphone (with both Ubuntu Touch and Android), or—when used with a monitor, keyboard, and mouse—be able to operate as a conventional desktop PC running Ubuntu. The Ubuntu Edge was also designed to support dual boot, and was to run along with Android.

The company aimed to produce around 40,000 phones rather than aim for world domination and despite their failure in this instance, they are still heavily embedded in future tech, having since gone on to produce a less ambitious phone, Ubuntu Phone and write about the experience. However, this has also been pulled rather abruptly with the company halting all work on phone os.

The MATE eBike is a foldable electric bike that can be ridden as a normal bike with 7 speed Shimano gears or through the assistance of the 350kw electric hub motor. It goes up to 35km/h, with a range of 50 to 80 kilometers on a single charge. The bikes feature front and rear suspension, a removable lithium-ion battery (and a USB port on the handlebars for plugging in mobile devices for charging), disc brakes, a three-way folding system that collapses the bike down to a fraction of its size, and an LCD dashboard. The bikes are being gradually delivered in batches depending on country of each backer.

Smart headphone company Bragi is responsible for one of the largest Kickstarter funding rounds in European history (over $3.39 million) with The Dash, headphones that not only enable the user to listen to music without leads  but also measure movements like pace, steps, cadence and distance along with heart rate, oxygen saturation and energy spent, without an attached smartphone.

They’ve gone from strength to strength since their first product, announcing at last week’s IFA 2017 in 2017 that their headphones are now Alexa-compatible. This marks a first for Alexa in the “truly wireless” headphone space. It’s also one of the first truly mobile hardware integrations for Amazon’s cloud-based voice service.

The Micro drone 3.0 is designed to shoot video at 30 frames per second. The video can be saved to a microSD card that slots in the device or saved to your phone via the corresponding app. Enthusiasts can view live streaming drone footage in 3D with a VR headset. A first person view puts you in the pilot’s seat, providing an immersive flying experience.

The company has since gone on the create adds on for those who want to participate in VR drone racing with a carbon fiber racing kit.

ZANO drone was pitched as a “ultra-portable, personal aerial photography and HD video capture platform”. It’s basically a flying camera that connects to your smart phone to enable the back to take stellar outdoor footage. Backers responded enthusiastically only to discover that the project crashed with only 600 barely functional drones sent to backers. Questions were raised about the missing drones and the quality of the drone portrayed in the crowd funding video. Kickstarter hired journalist Mark Harris, to investigate what happened to the money and investigate the project’s progress, as well as looking into any mistakes made by Torquin Group.

The project was closed down in November 2015 and the company sought a “creditors’ voluntary liquidation” almost exactly one year after launch. To date, the 12,000 backers are still waiting for their refunds.

Yooka-Laylee is a 3d platforming game featuring mythical characters that explore mythical worlds with moves such as “sonar blasting, tongue whipping, and sky soaring”. Players could discover “unique boss fights, mine cart challenges, retro-tastic Arcade games, quiz shows and more than 8 unique multiplayer games”. The company has continued to update the game since it’s release and Yooka-Laylee remains the most funded UK games Kickstarter ever.

If you love slim smartphone cases, but hate broken screens, Mous could be your product of choice. The ultra-slim iPhone Limitless cases offer military-grade protection in real and authentic materials like black marble, bamboo wood or Aramid Carbon Fiber. These cases use AiroShock protection to give your phone incredible protection. Their crowdfunding campaigns was one of the most successful ones on Indiegogo in 2015. In total they were able to raise more than $2 million.

Kookon’s headphones were marketed as “the first headphone comfortable enough to be slept in and smart enough to know how and when to adjust your music as you fall asleep and wake”. The headphones are embedded with miniaturized dry EEG sensors to be able to monitor the users sleep cycle and quality of sleep. An intelligent alarm identifies the perfect time to wake you based on your sleep cycle. These sensors also make use of an intelligent alarm that identifies the perfect time to wake you, making sure you’re alert and refreshed.

Sleep tech is big on crowdfunding campaigns (I counted over 100 different devices just last year) and it’s scientific credibility can be questionable due to the multifaceted nature of what produces good sleep. But it’ll be worth paying attention to the user feedback from backers. The product is yet to ship as backers questions seem largely focused on the choice of colour.

This one is a bit controversial. Advertised as the “proven cardio-training breakthrough”, BionicGym is one of the best funded “fitness machines” out there. The makers claim that their product enables easy calorie burn at work or intense workouts watching tv (500+cals). People seemed to have liked it. On Indiegogo, the Irish company raised more than $1.8 million from people who wanted to become fit without doing sports.

The product was received positively by backers and is now available to all on the company website and Amazon.

By the way: Are you still investing in crowdfunding campaigns? What’s the last one you received a product for? I know the last two I invested in never resulted in actual products. With more companies focused on VC funding and crowd investing, and the vagaries of timelines when it comes to hardware, is there still a need for crowdfunding?

Cate Lawrence
Cate Lawrence is an Australian freelance tech journalist based in Berlin, Germany. She has a keen interest in IoT, wearable tech, robots, biotech and startups.
RELATED ARTICLES
Funding