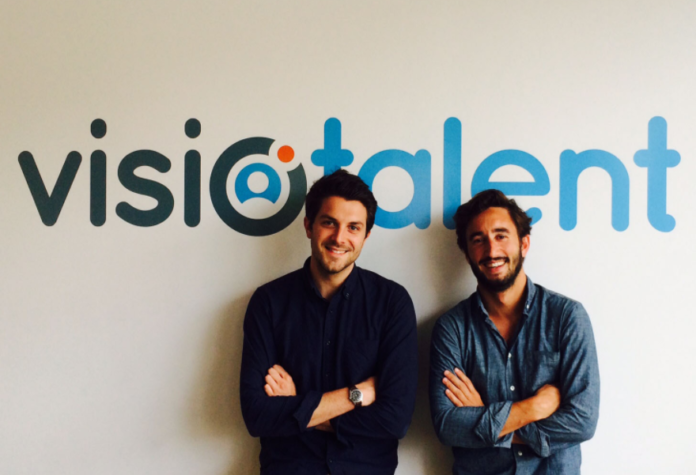 Countless of startups out there are aiming to disrupt the human resource space. The French startup Visiotalent, an intuitive, automated tool designed to streamline the recruitment process, is on a good way to really make an impact in the HR sector. The tool allows HRs to invite candidates to record an online video interview to support their application. The fast-growing company is based in Lille (France) and was founded in 2014. As Visiotalent recently started the international expansion, we thought it might be a good timing to do a little interview with the company’s CEO Gonzague Lefebvre (the guy on the right side in the picture above). Here it is:

How did you and your co-founder Louis Coulon come up with the idea for Visiotalent and how did it all start?

When we were students, in a French Business School, while we were searching for internships, we noticed that we received a lot of negative answers, our resumes being too empty…

We thought that it was a pity, as we felt our personality and motivation could definitely fit the company, but that couldn’t be seen on our resumes. We started looking at how personality could be highlighted in recruitment processes, and that’s when we found out that in the US on-demand video interviews were used for that, but didn’t make it to Europe. That’s when we started working on a more European-compliant version of video interviewing.

What were the main stumbling blocks in the first year after founding Visiotalent and how did you overcome them?

How would you explain Visiotalent to someone who never heard of it before and what is the advantage for its users?

Visiotalent aims at replacing the classical (and outdated 😉 ) phone interview. It allows a larger selection of candidates to answer the recruiter’s questions, recording themselves from home, with their webcam, smartphone or tablet. Those questions can either be known by the candidates on forehand or be discovered spontaneously, it’s the recruiter’s choice.
The main assets are:

What is Visiotalent’s unique value proposition and what sets it apart from its competitors?

Visiotalent is not the only video-based recruitment tool on the market, but our goal is pretty unique. Our daily work aims at making the tool the easiest to use for both candidates and recruiters, in order to make it the most adopted one.

We focus on the user’s experience, rather than adding technological features like facial recognition for instance. When a candidate has taken an interview on Visiotalent, we want him to feel it was a real joyful experience.

What are the next steps and future plans for Visiotalent?

Visiotalent has started its International expansion, and in the future more offices will be opened abroad (Germany, UK, Switzerland, and more).

We will also follow on with the diversification of our products, tackling internal mobility, employer branding, education and training.

After our merger with French leading job board: Meteojob, in 2016, we will also be able to add more intelligence in our tools, based on their super-efficient matching algorithms.
Our common goal is to shorten a traditional 5-to-7 weeks recruitment process to a maximum of 10 days.

Why did you decide to expand to Belgium, Italy and Spain – and how do you think the market will develop in the near future?

The time-to-market for theses three countries seemed pretty adequate, so we decided to launch our expansion with those. We now are lucky to have talented local teams, with great market knowledge so the results follow quickly. Our goal is to become the most used video interviewing tool in those three markets.

With your expansion aiming for 100-150 employees split in different locations by the end of 2018, how will you support corporate culture and how make sure employees stay happy and motivated?

Culture of happiness is at the heart of the development of the company since the very beginning. For instance, more than 50% of our current 35 employees have shares of the company, and more will have a chance to get some in the next years.

We focus on internal communication to be sure everyone understands and shares our vision and challenges. Slack is our best friend 😉 The whole team also meets twice a year in our headquarters, in Lille, or for a yearly trip (last year it was Barcelona), for team building.

What is your experience with Lille as a location to start and scale a tech company?

We have been helped in this journey by Euratechnologies, one of France’s greatest incubators, based in Lille. It has been really helpful getting us in touch with HR and financial actors, to build fast. Afterwards, we opened an office in Paris, as most of our French B2B customers are based there.

Today we have 7 offices in Lille, Paris, Lyon, Nantes, Brussels, Milan and Madrid: we are a European company. So our headquarters are in Lille, but we don’t describe ourselves as from Lille, but European, aiming at being worldwide!