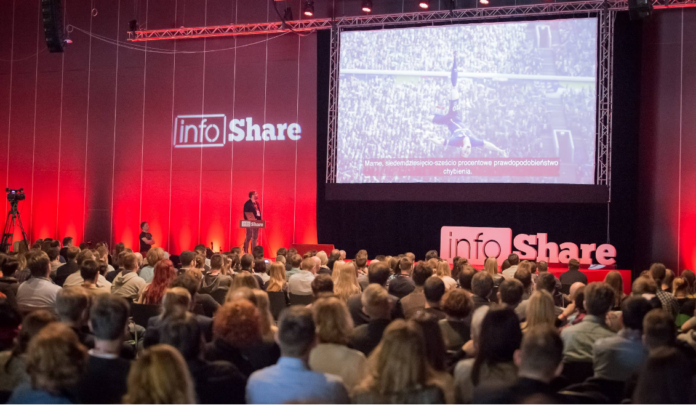 infoShare, one of Central and Eastern Europe’s biggest tech conferences, takes place May 17-19 in Gdansk, Poland. The three-day event provides startups from the region with an opportunity to network with potential investors, future customers and the media. More than 100 VCs and angel investors will be attending along with 120+ speakers from companies like Google, Slack and Netflix, and investment firms such as Inventure, Karma VC and Credo Ventures.

Grzegorz Borowski, the CEO of infoShare Foundation explains: “We see both – startups looking for investors and VCs/CVCs searching for new businesses to invest in. They just need to be there at the right place and the right time to find each other. infoShare is the spot where they connect. Last year 80% of startups talked to investors during the event and 60% of the talks continued afterwards.”

The exhibition allows startups to present and show off their products and services to an interested crowd of techies and potential customers. In 2016, more than 200 startups took part in the expo and this year more than 5,000 people are expected to walk through the doors of the event per day.

Agnieszka Meller, head of startup relations at infoShare says: “It’s a great chance to show your product to a big international audience and make business relations – either on the venue or during the networking events.”

The Startup Contest, co-organised by infoShare and STARTER Incubator, is a chance for startups to pitch to a panel of investors with the chance to win equity-free €20,000. Startups that participate in the contest will also have an opportunity to secure investment while networking with the VCs that are attending the event. The jury for the Startup Contest includes Credo Ventures founding partner, Jan Habermann; Almaz Capital general partner, Pavel Bogdanov; and Mayor of Gdansk, Paweł Adamowicz.

Startups in the contest will have access to wide pool of potential clients with more than 3,000 companies represented at infoShare. Before the Startup Contest finals, participants will compete in quarter finals at Starter on May 16 where 20 startups will be chosen for the semi-finals on May 17 with the finals on May 18. Learn more about the contest and how to apply. Registration closes on March 31.

“Nexbio, last year’s winner, was invited to make a presentation to the President of Poland. Recently, it has scored another win in the Chivas the Venture and will go on to represent Poland in the world finale in Los Angeles” – says Joanna Grandzicka, COO at STARTER.

At this year’s edition of infoShare a second contest for startups will take place – Digital Health Hackathon, co-organized by infoShare and their vertical partner INTERIZON ICT Cluster. This contest is dedicated to startups from the digital health industry which focus on one of three areas: mHealth, personalised healthcare and ageing populations. The jackpot amounts to €36,000. You can take part in both contests.

Aside of an exciting conference program, infoShare will be hosting several informal networking events and parties which help you grow your network of business partners and friends. Register for infoShare 2017 now. And to get some impressions from last year’s event, check out the video below:

Meet the 10 finalists of this year’s FutureTravel Summit Pitch Competition!

How to Web Conference 2022: The hot spot for startups & innovation in Eastern Europe this year! (Sponsored)