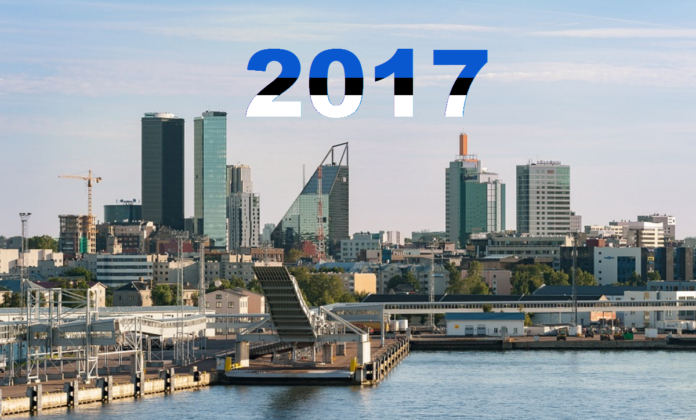 Despite the country’s small population size of slightly over 1.3 million, Estonia can easily be described as a real startup nation! The current generation of Estonian entrepreneurs built internationally successful companies like Skype, TransferWise and Pipedrive. Since Estonia is a very tech-savvy and entrepreneurship friendly country, the number of new exciting tech startups is seems to be growing year by year.

In the beginning of this year we took a close look at the Estonian startup scene and created a list of 7 promising startups to watch in 2017. All of the startups we’re mentioning below entered the market within the last two years and each one of them has something special to add to the tech and/or business world in 2017.

SprayPrinter is a smart spray can technology which prints pictures from smartphones to different surfaces. For that, users need a SprayPrinter, the smartphone app and spray cans. The phone tracks movements of the printer and knows when to release paint and when not. It is like a colouring book plus a pencil. SprayPrinter was founded in 2015 and is based in Tartu. The young company did a succesful global crowdfunding campaign on Indiegogo which resulted with over 200 pre orders and massive amount of inqueries from retailers, promoters and strategic partners.

Shipitwise: Founded in 2015, Tallinn-based Shipitwise aims to end the hassle to ship unstandardized items overseas as a small business or an individual. In order to do so Shipitwise built a mobile platform and service to help businesses with easy and affordable shipping. Shipitwise claims to be the only international delivery company offering transparent pricing for small-business users. The promising startup already secured about €400K in funding through equity crowdfunding and angel investments.

Weps is a chatbot which helps you building a website in two minutes. Founded in 2015, Weps is one of the first to make something as complex as creating a website be as easy as talking to a friend. By answering simple yes-or-no questions the user gives Weps all the data it needs. In seconds it analyzes thousands of options and creates a website instantly. The young company is headquartered in Tallinn but also successfuly took part in the Berlin-based accelerator program Axel Springer Plug and Play.

Palleter was founded in 2015 and connects trucks and nearby freight offers. Thanks to Palleter, Truckers get freight offers relevant to their trips. Shippers get a convenient way to book transport on nearby trucks. The Tartu-based startup Palleter made it into the 2016 class of Techstars Berlin, where it secured seed funding as well as valuable advise and industry contacts.

Clanbeat is an ongoing feedback tool for monthly performance reviews, targeted at managers who care. The Tallinn-based startup helps managers to become leaders and employees to discover their full potential through 1-on-1 meeting culture. Among active clients are Transferwise, Volvo, Ericsson and Telia. Before founding Clanbeat, CEO Ragnar Saas co-founded Pipedrive. Clanbeat just secured funding from 500 Startups and plans to relocate to the Silicon Valley.

TransferFast enables instant money transfer between banks. No matter the time or day. TransferFast moves your money from bank to bank in just a few moments. The Tallinn-based startup was founded in 2015 and so far secured about €155K in venture capital. TransferFast works particularly well with Nordea Bank, Danske Bank, Swedbank, SEB, Krediidipank and LHV.

Barking has created thousands of new parking spots in cities by cross-using already existing parking facilities. Businesses, schools, hotels, apartment buildings etc. can rent out their parking spots on closed areas while they are not using them. Barking connects electric barriers and gates to the cloud and thus provides access to those areas via mobile app. Drivers can now park on those areas by opening barriers via the Barking Mobile App. The Tallinn-based startup was founded in 2015 and secured about €240K in funding.

10 Estonian startups to look out for in 2019 and beyond

Shipitwise: The first syndicate on Funderbeam reaching 100% of their funding goal