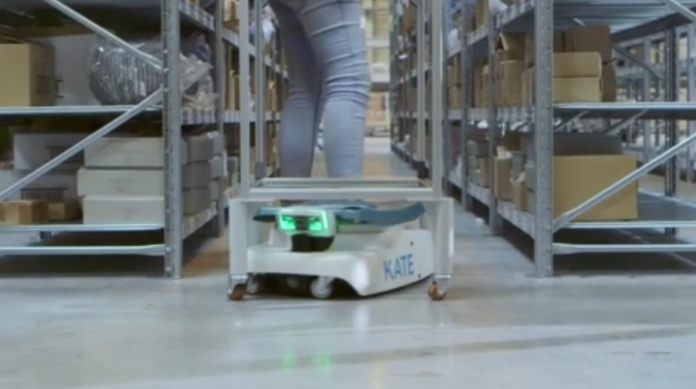 The French robotics startup Exotec Solutions, which recently launched an order preparation system powered by a fleet of collaborative mobile robots, announced today that it raised €3.3 million from 360 Capital Partners, Breega Capital and several of its original investors. The fresh capital will be used for product development and commercial development. The Paris and Lille-based startup was founded in 2015.

Exotec Solutions provides e-commerce retailers with an order preparation solution powered by a centralized intelligence system, which coordinates both mobile robots and humans. A warehouse employee typically covers around 15 kilometers per day assembling and dispatching orders. The Exo, ​Exotec’s first version of the system, is able to reduce this distance to four kilometers, thus doubling the productivity of each employee. The system offers extreme flexibility: robots or additional stock can be setup during the weekend, allowing logistics managers to finetune order preparation tools to their requirements.

Romain Moulin, co-Founder and CEO at Exotec Solutions stated: “We are delighted to have 360 Capital Partners and Breega Capital on board in this financing round. Their deep sectoral and operational expertise will contribute to positioning Exotec Solutions strategically within this fast growing market. The additional funds will allow us to boost our commercial development as we prepare to announce several partnerships with key players in the logistics industry,”

Exotec Solutions is currently finalizing the second generation of its product, powered with greater intelligence and preparation capabilities. It will be officially launched at the Intralogistics Europe in March 2017.

Francois Collet from 360 Capital Partners commented: “The global market for order preparation is estimated at around $30 billion, and in France alone, there are over 5,000 warehouses. Exotec Solutions has developed a new generation of logistics robots to address this genuine demand. The company has the potential to become a champion in its category.”

Exotec today also opened its new office space in Lille, France. The young robotics company will recruit over 30 employees in 2017, curating a team of elite researchers and developers with a passion for robotics.

Didomi raises €33.8 million to expand its consent and preference platform across Europe and the US