Web Summit kick off: Welcome to the Paddy Park 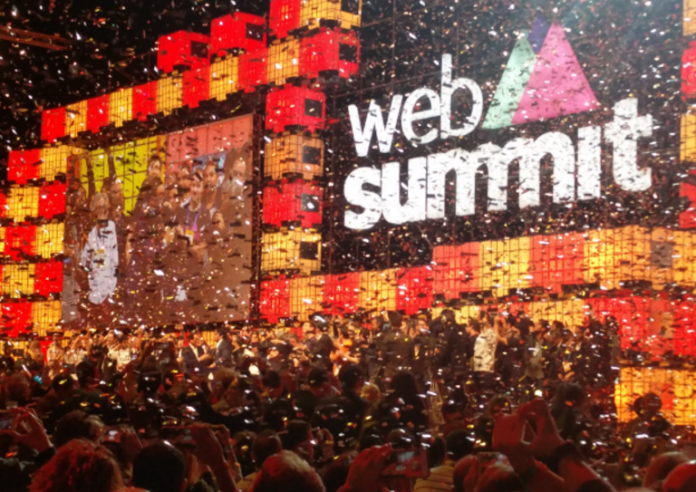 What do you get when you gather tens of thousands of over excited people, sell them passes and promise them action? A theme park! Paddy Cosgrave just kicked off another Web Summit – and there are so many attractions in the park, it may happen that you leave Lisbon missing one.

It all starts with the impressive Parque das Nações (it’s called a Park as a legacy from World Expo in 1998), a sunny riverside walk where the huge MEO Arena can’t be missed. It’s difficult to decide which one is more stunning, the outside shell or the inside skeleton of the arena (being there you know what I mean). What an excellent choice for the Central Stage.

How early can you start? Welcome to the Soirée! The day before sounds great and a 90 minutes late afternoon kick-off set the mood for this year’s summit. An amazing crowd line up outside the huge pavilion. Given the number of participants, only the largest football stadium in Portugal could host such a crowd. Luckily, most of the 50,000+ participants were not going to the Central Stage at the same time. Nevertheless, a few thousand were left outside for yesterday’s kick-off and a lot of stress is anticipated for the coming days.

After Paddy Cosgrave kicked off the Web Summit yesterday evening, it was mentioned a few times that there’s expectation in the air. The feeling a huge change in underway is very clear. Either that change is positive or negative, it will depend on whose starring, not so much on technology. Joseph Gordon-Levitt, who joined the kick-off yesterday evening, also agreed with this. The actor became an entrepreneur due to unemployment took the stage to inspire the audience.

The sad truth is, politicians are not prepared for the coming changes, or at least that is the common opinion of the Portuguese José Manuel Barroso, former EU Commission President, the Brazilian Roberto Azevedo, Director-General of the World Trade Organization and the Danish Mogens Lykketoft, President of the United Nations General Assembly. Inspired by Roberto Azevedo, I hope truck drivers and related businesses look to what’s happening with autonomous vehicles and start planning for the future.

After inviting all the Portuguese startup CEOs to the stage, there came a moment a friend described as a “startup orgasm” – the Paddy Park shined with light and confetti (check the picture from the beginning of this post).

Of course, the morons of this world are also present at the Web Summit. I have to say I had the privilege to meet some of them (I try to be brief, though). Yes, the wi-fi network didn’t help Paddy Cosgrave in a moment I could only relate with the infamous Windows blue screen. Yes, there were a few boos in between loud applauses either for José Manuel Barroso or António Costa. And yes, some of us are concerned with the American election. But the morons don’t get two things. First, the content of the talks, some words are just too elaborated. Second, those who do change the world are those who take the hands underneath their asses. You know, “the crazy ones, the misfits, the rebels, the troublemakers…” Because this is theirs, they have my full respect. And all the help to let them do wonders despite the morons.

And finally, what happens in the Night Summit, stays in the Night Summit. Or not. It’s the natural extension of the daily networking, so there’s a lot of fun around the clock (at least, for the purpose of this text, I will not differentiate fun from work).

Today is for real. I’ll come back with more!

Want to exhibit at events? The Startup League might just sponsor your booth! (Sponsored)