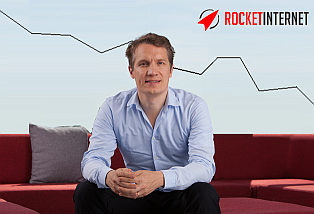 Rocket Internet, the Berlin-based startup factory with the mission to build the world’s largest internet platform outside the United States and China, just released the financial results for the 3rd quarter of 2016.

A selected group of Rocket Internet’s portfolio companies continued on the path towards profitability. For the first nine months 2016, the aggregate adjusted EBITDA margin improved significantly at all selected companies from a weighted average of -34.4% in the first nine months 2015 to -17.5%. The selected companies continued to grow revenues, whilst absolute EBITDA losses decreased by €159 million.

HelloFresh, the leading global fresh meals at home provider, grew by 121.3% and reached €438 million net revenue in the first nin months 2016, while improving its adjusted EBITDA margin by 11.1% points to -15.1%.

Online Home & Living company Westwing also improved its adjusted EBITDA margin by 20.5% points to -9.2% during the first nine month of 2016.

Rocket Internet Group’s revenue in the first nine month of 2016 was only €40 million and the consolidated loss was at an impressive €642 million. According to Rocket Interent, this development has respectively been impacted by deconsolidation of subsidiaries and impairment related charges of associated companies (in particular related to GFG).

Oliver Samwer, Rocket Internet’s CEO. stated: “With the uplisting to the Prime Standard, and the subsequent inclusion in the German SDAX, we achieved one of our stated goals. The operating progress accomplished by our selected companies translates into continued growth and much improved margins,”

Leaving the improved numbers of the “selected companies” aside, the results for the 3rd quarter of 2016 don’t look very good. So it comes at no big surprise, that Rocket Internet seems to decrease its team size within the Berlin-based headquarters.