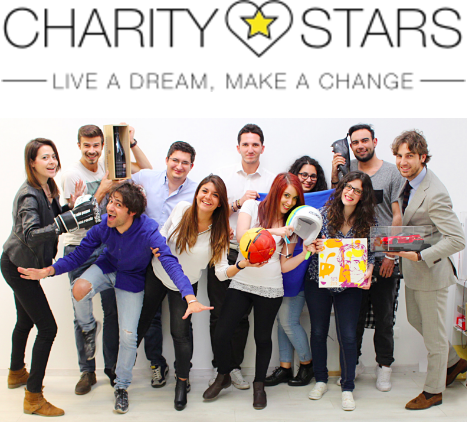 Last year, we introduced you to CharityStars as an Italian startup to look out for in 2015. The team behind CharityStars is based in Milan, has recently opened offices in London, and ended the first quarter of 2016 with a positive growth of 120% in funds raised from charity auctions compared to the previous year. In 2015 CharityStars conducted €1,800,000 of online sales. Among the most prominent auctions from 2015 were a power-lunch with the Founder of Candy Crush, Riccardo Zacconi, which sold for €25,000, an artwork by Andy Warhol which went for €27,000, a Valentino Rossi signed helmet for €15,000 and a Barcelona football shirt with a personalized dedication from Lionel Messi that sold for €11,000.

Francesco Nazzari Fusetti, co-founder of the project explained: “We have become the partner of choice for over 400 non-profit organisations. To date each charity organizes an average of 10 auctions a year on our site. Our goal is to have 2,000 charity partners by 2018 and double the average sale price, which today is about €500”.

He continued: “After the United Kingdom, we want to launch in the US and China. For the latter we already have several thousand users who follow our auctions and have become some of our top bidders. We have just launched the Chinese version of the site and we want to invest in targeted marketing campaigns. A paid online acquisition campaign would be a first for us, given that to date we have just benefited from free celebrity promotion through their social media channels.”

Among the great innovations of 2016, including a website redesign and launch of the prize draw technology, CharityStars adapted their business model to embrace private users. Initially, only non-profit organisations could upload auctions to the platform, but now the auctions are also open to private users, such as artists or private collectors, who can auction their works and memorabilia and decide how much of the auction proceeds to donate to charity.

CharityStars main competitive advantage is their innovative tablet auction technology which connects digital events to online bidders. During charity gala events, guests can bid using tablets located on the tables. Online users can simultaneously continue to bid against the gala guests, encouraging each lot to reach its full fundraising capacity. This unique technology has already benefited north of 50 gala events including the Eva Longoria Foundation and Novak Djokovic foundation.

Ebay stands as one of CharityStars principal competitors, providing their charity auctions for free. However, whereas CharityStars keeps a 20% share of the final bid raised, the amounts raised are generally significantly higher than the Ebay platform can generate.

Interestingly, some of the new investors have decided to auction experiences with themselves on the fundraising platform. In 2015, Fabio Cannavale, CEO of the LastMinute Group, auctioned the opportunity to pitch a business idea to him. “It was great surprise to find out that someone would pay €3,000 for a lunch with me” said Fabio Cannavale.