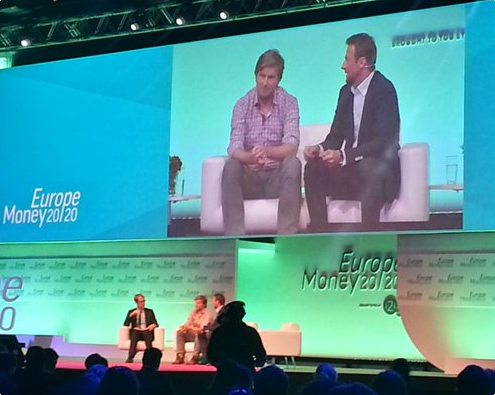 With more than 3,500 attendees, 420 speakers, 200+ sponsors and 100+ media partners, the MONEY 2020 EUROPE, which was happening in Copenhagen last month, was one of the biggest Fintech events of the year.

As we all know, Fintech (Financial technology) is a hot topic these days and investors chase fintech startups like crazy. Euro FinTech funding levels rose to new heights, with one investment per day in Q1 2016, according to Tech.eu. But Fintech is also maturing. The founders of today’s Fintech startups switched from “killing the banks” mode to “let’s work together … somehow”. And banks are willing to cooperate. Below you’ll find some highlights of this year’s MONEY 2020 Europe:

TransferWise was telling the market that banks are terrible with their high foreign exchange fees. Now, the startups seems starting to like banks. TransferWise has already integrated with Estonia’s largest domestic bank, LHV, and also with Germany’s Number26 bank. And Transferwise founder Kristo Käärmann was in Copenhagen and was busy dating other banks’ CEOs…

Germany-based Raisin is a pan-European savings platform that allows users to compare rates on savings accounts, and then open and manage accounts in other countries. The startup announced its expansion to 30 more European countries from Germany and Austria.

The startup pitch at Money2020 Europe was won by a Portugal data startup: Crowdprocess. Its aim to prevent bad loans. The service  brings the power of Machine Learning to  Credit Risk Departments, allowing to build better scoring models.

Several big banks and financial groups were in Copenhagen. And they showed willingness to combine their financial strength and expertise with the drive of young fintech startups.