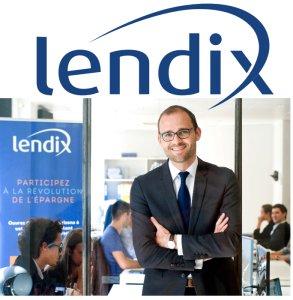 Lendix, the Paris-based SME loan platform, announced today it has raised $13.5 million in a series B funding round led by CNP Assurances. Its existing shareholders like Decaux Frères, Partech Ventures, Sycomore Factory, Weber Investissement and Banque Wormser Frères also took part in the round, together with institutional investors Matmut and Zencap AM. This capital raise also comes with significant commitments (in excess of $22 million) to lend on the platform via its new fund, Lendix SME Loan Fund II.

By the way: We’ve mentioned Lendix in January in our list with 5 French startups to look out for in 2016. Lendix was founded in 2014 and aims to become Europe’s leading P2P lending platform.

“We’re delighted to welcome such prominent investors; their partnership with Lendix is a strong expression of trust in our ambition to revolutionize SME lending.” said Olivier Goy, founder and president of Lendix. He continued: “We have many streams of collaboration with them in France, Spain and Italy which will benefit our lenders and our borrowers”.

Hélène Falchier, head of Private Equity Investments at CNP Assurances, will become a member of the Lendix board. She stated: “This first investment in the Fintech sector is based on our confidence in Lendix’s ability to expand its leading position in France but also in other markets in Continental Europe”.

Since completing its first loan in April 2015 to Alain Ducasse Entreprise, Lendix has taken a solid leadership position in the SME marketplace space by becoming #1 in France with 40% market share. Without including the recent acquisition of short term loans specialist platform Finsquare, the Lendix community has financed $22m worth of loans to close to 100 SMEs.

“We’re very impressed by the development of Lendix – confirming our view on the quality of the team, held even before the company launched. It has become leader within 12 months while producing safe returns for lenders. It has the right setup for rapid international growth, which we’re pleased to support.” said Philippe Collombel, managing partner of Partech Ventures and a seed investor in Lendix. He continued: “We have increased our participation with a $3.5 million investment in this round”.

Lendix plans to reach the milestone of $56 million lent during the next 12 months. As it has been the case since their launch, those loans will be financed by Lendix’s community of 10,000 private lenders and by institutional investors. In order to deal with the strong growth, 20 new team members will be hired across France, Spain and Italy to expand the current 30-strong team.