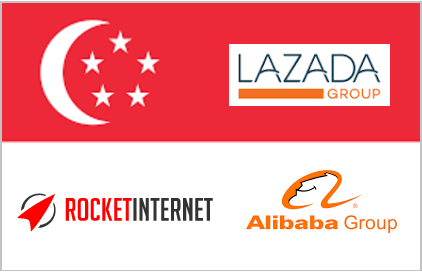 The Chinese ecommerce giant Alibaba Group and Rocket Internet’s Lazada Group announced today that Alibaba entered into an agreement to acquire a controlling stake in Lazada, a leading ecommerce platform in Southeast Asia. The transaction consists of an investment of approximately $500 million in newly issued equity capital of Lazada and acquisition of shares from certain shareholders of Lazada, for a total investment by Alibaba of approximately $1 billion. The transaction is expected to help brands and distributors around the world that already do business on Alibaba’s platform, as well as local merchants, to access the Southeast Asian consumer market.

Lazada is the one-stop ecommerce gateway for local and international brands and distributors to consumers. The ecommerce heavyweight was founded in 2012 by the German company builder Rocket Internet, currently operates ecommerce platforms in Indonesia, Malaysia, the Philippines, Singapore, Thailand and Vietnam. These six countries combined have a population of approximately 560 million and an estimated Internet user base of 200 million, according to Internet Live Stats. With only 3% of the region’s total retail sales conducted online, Southeast Asia is expected to offer tremendous growth potential for ecommerce companies as internet penetration continues to rise.

Michael Evans, President of Alibaba stated: “With the investment in Lazada, Alibaba gains access to a platform with a large and growing consumer base outside China, a proven management team and a solid foundation for future growth in one of the most promising regions for ecommerce globally. This investment is consistent with our strategy of connecting brands, distributors and consumers wherever they are and support our ecosystem expansion in Southeast Asia to better serve our customers.”

Max Bittner, CEO of Lazada Group added, “We are very excited about joining forces with Alibaba and see significant synergies that will drive great benefits to our customers in Southeast Asia. Southeast Asia is an attractive mobile-driven consumer market that is highly fragmented and diverse with significant barriers to entry and a nascent modern retail sector that has large headroom for growth. The transaction will help us to accelerate our goal to provide the 560 million consumers in the region access to the broadest and most unique assortment of products. Furthermore, leveraging Alibaba’s unique knowhow and technology will allow us to rapidly improve our services and provide an even more effortless shopping and selling experience.”

Rocket Internet stated that it sold a 9.1% stake in Lazada for $137 million, which leads to a current valuation of about $1.5 billion. The Berlin-based company builder now remains owning a 8.8% stake in the Lazada Group.

Oliver Samwer, CEO of Rocket Internet, commented: “This transaction is a key milestone for Lazada as it underlines its position as leading online platform in South-East Asia. Alibaba as the new major shareholder is further strengthening this position and provides the basis for significant future growth given Alibaba’s strong strategic position in the region. We are looking forward to working with Alibaba and the existing Lazada shareholders to support Lazada in building the leading ecommerce franchise in South East Asia.”

Share
Facebook
Twitter
WhatsApp
Linkedin
Previous article
Junomedical, the new portfolio company of Project A, launches its medical travel platform
Next article
METRO and Techstars kick off the second round of their joint accelerator programme