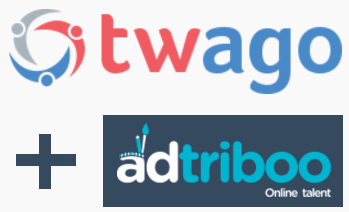 twago, Europe’s leading freelance marketplace, acquires Spanish freelance platform Adtriboo. Financial details of the deal have not been disclosed yet. With the acquisition twago further consolidates its position in the European and Spanish-speaking markets, since several countries in Latin America were serviced by Adtriboo in addition to Spain.

As a result of the acquisition, Berlin-based twago doesn’t only expand its coverage, it also offers registered freelancers and businesses an important increase in opportunities. The 140,000 Adtriboo freelancers will benefit from significantly more projects and clients in the future through twago.

Thomas Jajeh, founder and CEO of twago, commented: “In the Spanish market, freelancers account for more than 16% of the workforce, which makes Spain one of the most important markets in Europe. 60% of freelancers are between 25 to 49 years old and the number of under-25s has nearly doubled in the past two years. The employment market in Spain is experiencing an enormous change. In this exciting time, we would like to further expand our leadership in Europe”.

twago’s last Freelancer Report from November 2015 continued to highlight the relevance of the Spanish market. Madrid recently surpassed Berlin as Europe’s freelancer capital. Barcelona is ranked 3 and Valencia stands at 9th position. A total of four Spanish cities are represented in the top 15 worldwide freelancer rankings on twago. Furthermore Caracas, the capital of Spanish-speaking Venezuela makes it in the list for the first time. The New York Times also featured the twago freelance community in Cuba recently. The volume of Spanish projects on twago is only second to German ones, and the average satisfaction with Spanish-speaking projects reached 4.5 out of 5.0 points. These numbers show the importance and significance of the Spanish-speaking freelance marketplace.

twago was founded in 2009 and aims with its multilingual approach (English, German, Spanish, Italian, French, Dutch, Swedish, Danish, Norwegian, Finnish and Flemish) primarily to European customers. The customers using the platform have access to nearly 500,000 professionals from more than 200 countries.