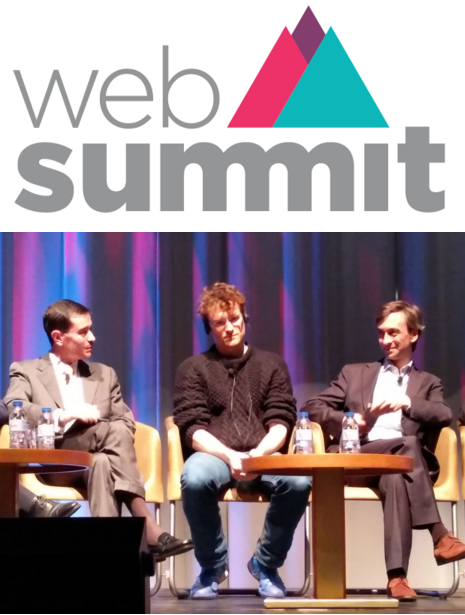 You probably know that the one and only Web Summit is going to Lisbon for the next three editions.

Paddy didn’t reveal much about the conference, but confirmed that startups applying to pitch competitions remains as the backbone of the event.

When asked what is the organization behind the Web Summit like, he mentioned data science has played a major role and is an innovation factor. He told the audience that when a lot of people meet at a public space, an organizer shouldn’t expect them to be able to find their match and should provide an excellent experience, like recommendation algorithms to match participants with correspondent interests. “Every detail counts”, he stated, giving the examples of lanyards being well positioned on the chest, with generous font sizes, so people identify each other; or helping a dinner sponsor to invite the right people to a particular venue, say, during Pub Summit, one of the conference’s many side events.

An important message to startups emerged from Paddy Cosgrave’s words, second by many of the presents, including Deputy Minister of Industry João Vasconcelos, Deputy Mayor of Innovation Filipe Araújo, Aveiro University Incubator General Manager Celso Guedes de Carvalho or InvestBraga President Carlos Oliveira. The Web Summit is not only a three day event but, for those startups willing to take the most out of it, several months of preparation, scheduling and training for a perfect execution. As in “if opportunity doesn’t knock, build a door”. Or, fitting better to the present case, when opportunity knocks, make sure you’re behind the door, smiling.

There’s another edition of Startup Go Global conference in Lisbon Thursday (registration closed) where the enthusiasm may be bigger, as it often happens when playing home. We look forward to November to find out what the outcome of Lisbon Web Summit will be – we know already that there will be less rain and less Guinness. As always, EU-Startups.com will be in the first row.