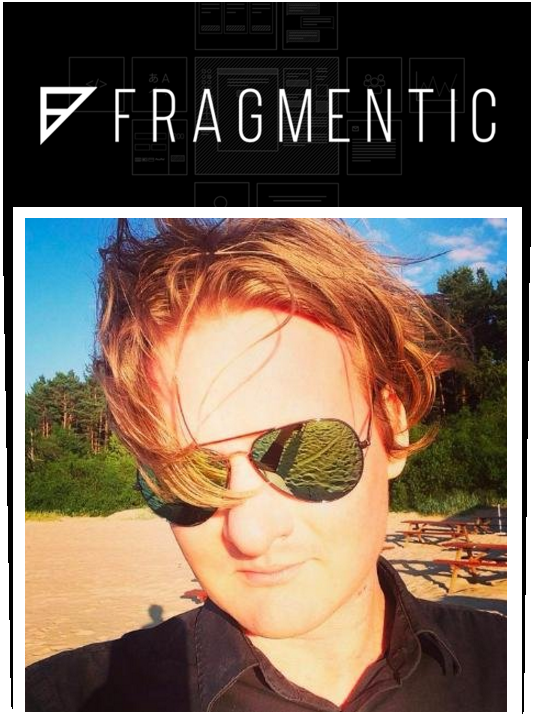 Uldis Leiterts, the Co-founder of the successful data visualization startup Infogram, has just announced his new project – Fragmentic. Whith his new startup, Uldis plans to revolutionize the SaaS industry in 2016. Although the specific date of the release has not been announced yet.

“Applications all have several characteristics in common – users, statistics, chats, subscription plans (etc.). The new service will offer those modules already made and available to integrate in web applications. So basically it is going to be possible for anybody to create an app,” says Uldis. His new service is going to offer companies the opportunity to save a huge amount of money which is currently invested in the development of different features that are common to many projects.

Uldis’ other company Infogram has grown into a successful company within only 4 years. It has received many significant awards not only in Latvia, where this tool was created, but also internationally. Uldis Leiterts says: “For example, last year The Economist named Infogram the 3rd most valuable internet company in Latvia. Our website has 30 million visitors monthly and the tool is used in 200 countries all around the world. Financial success has doubled in last year comparing to the year before!”

Uldis is not only a successful entrepreneur, but also an active participant of the startup community. He has just joined the Pirate Summit team, which has plans to organize a big conference in Latvia as well as to take care of the local startup ecosystem. We’re chatting about this and other topics in the interview below:

You have also announced the new local event – Digital Natives Festival 2016. It has grown from the event last year Silicon Valley comes to Baltic, which was something new in Latvia. What happened there?

Uldis Leiterts: It was the largest tech event in Latvia – 650 participants, more than 4000 people watching in the online television and even more watching afterwards on YouTube. When we contacted organizers of the event Silicon Valley to Baltics, their ambition was that it should be huge event. If we compare to other European events, 650 people is not a big event, but it is just a beginning. Our ambition remains – to be the biggest tech event in Latvia. So this year we have the plan to double the size of attendees. I think that having such a major event is critical to tech community. Now we have two events locally – it is Tech Chill Baltics in spring and our event in the autumn that is going to have different name next year, which we won’t disclose yet.

Many speakers were first time in Latvia. What was their impression – what is going on here?

Uldis Leiterts: I think that quite a few people were looking for the reason to come to Latvia, but this event was the reason. And we had some things to show – we have talented people here, we have the fastest internet in Europe. I hope we managed to use all the opportunities that conference business gives – people who are speakers or attendees they go home and tell their friends about the event and about the country. So we hope to have them this year. And it usually takes two to three years to actually build the proper high quality event. We had an amazing start. It all makes sense only if we don’t stop and keep going. It’s about putting Riga on the map.

But I would like to mention also feedback from local people. There was Venture Summit during the first day of the conference. Government institutions after this event have noticed that startup industry is significant part of the economy. Many government initiatives now have been developed with the understanding about the startup ecosystem. Latvian state itself has never been very outspoken regarding innovations. We never had it on the top of the agenda. But it will leave a huge impact on the self-esteem of the tech community if government will be ready to assure that it does care about tech innovation, having the fastest internet on the planet and the best tech companies on the planet.

There is a couple more reason why we need support from the government. If we want to build global companies, we should attract talent from Russia, Japan, United States. We should move those people to Riga so they can work here and build global companies. Multiculturalism within the team is one of the key elements that make company to move forward. If we take Infogram as example, we have people with 14 different nationalities within the team!

We should have entrepreneurship visa. If you work in tech company in Riga, you should have “green card” within a very short time frame to enter European Union and work here. We had hired person from Australia. He had to wait in Riga for 6 month to be able to start working. This is definitely not the way we want to see that.

Startups sometimes give stock options to the employees. The definition of stock options in Baltics is not developed. Stock options are given as income and taxed as income that is not in a way it supposed to be. Legislation should learn the purpose of the stock option plans. If they won’t do that, employees are going to suffer.

How to attract people from other countries to work here?

Uldis Leiterts: There is only one reason why people would like to come to Riga. They will do that if we have an amazing ecosystem and amazing companies to work for. There is absolutely no reason why somebody would voluntary move to Riga or Helsinki or elsewhere. Only thing that matters is what happens here. Sillicon Valley is not the best place on the earth. It is probably event the worst part of Sanfrancisco with a lot of fog and the weather is probably the worst in a whole California. But the number of talented people attracts there more and more talented people. And it makes ecosystem exceptional.

How did you managed to attract so many nationalities to Infogram?

Uldis Leiterts: We are good.

I believe you are watching startup scene in Latvia. Have you noticed some brilliant ideas that have the potential to grow big?

Uldis Leiterts: I haven’t seen properly ambitious large tech companies around. Lot of amazing people do a lot of amazing things, but all of them seem to be improvable. I haven’t seen one potential Latvian unicorn yet. Recently we have seen a few good fintech startups poping up. Hopefully something of that works. If I have to point out a few companies apart from Infogram that I really like – absolutely undervalued company that has gone through a lot of challenges and learning and we should really be proud of is Ask.fm. They have built the largest social network Nothern Europe has ever seen. The other one is MikroTik. You can go to the small village in Africa and stay in the small hotel. When you’ve been given wi-fi password, the login screen will ask you whether you understand English or Latvian… Of course, I am proud of Infogram as well.

What startups are missing?

Uldis Leiterts: Uniqness would be the most important thing. I wish to see something that hasn’t done before. Startups should not be afraid of going to unexplored areas – see the blind spot, just go there! Starting new company now is easier than ever before.

What was the Infogram’s formula of success?

Uldis Leiterts: Infogram is fixing problem for publishing industry. Publishing interactive data online was a bit of painful. Our major customers are still online media. We are getting about 30 to 40 million visitors a month for infographics that enriches news content thus making it more interactive as well as attractive. And that is the reason why people share it more on social networks and also spending more time to look at this content.

How did you come up with this idea?

Uldis Leiterts: I was watching how journalists were publishing screenshots with charts from Excel tables that just look horrible. I took it as my job to make these pieces of information look attractive in a short period of time. Thousands of infographics are being published every month so it seems to be working.

What are your main lessons learned while developing a startup?

Uldis Leiterts: It is not an easy question to be answered. There are a lot of opportunities given to you when you start to do things that other people notice. You’ll receive too many opportunities so you should learn to say “no”. If you work hard enough on your idea, it will affect every aspect of your personal life including sleep. If it doesn’t then you are probably working not hard enough.

It is very important to get right people in the team. There is a line where you have experience on the one side and ambitions and willingness to learn on the other. At the beginning you should have people in the team with ambitions and ability to learn quickly. They probably don’t have idea how to do things to make something happen, but it doesn’t matter a lot at this stage. Afterwards you can hire people who can do one specific task, but could feel pretty confused during the early stage of the startup. It happened to us in Infogram and that was the reason why some talented people left. It was just not the right time for them and us to work in one team.

Ieva Treija
Ieva Treija has joined EU-Startups.com in August 2015. She has two passions: marketing and startups. Background in journalism helps her to put both passions together and come up with exciting stories for the readers. Ieva lives in in Riga (Latvia).
RELATED ARTICLES
Estonia-Startups