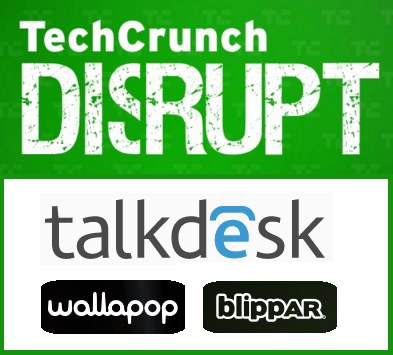 Last week I finally attended my first TechCrunch Disrupt (London) where Talkdesk Co-founder Christina Fonseca signed up as a speaker and judge. Talkdesk was born four years ago in a bid to win a Macbook Air. A prototype was built in just ten days. Talkdesk won. This marked the startup journey for Fonseca and Co-founder Thiago.

So what is Talkdesk, Talkdesk offers call centre software which seamlessly interoperates with external API’s such as Zendesk, Shopify, Salesforce and many more. It’s interesting the latter Salesforce recently joined forces with Talkdesk as an investor. A 360 view of customer accounts via intuitive streamlined API’s and even an integrated widget within Salesforce and Zendesk is one of many added values provided by Talkdesk.

Eliminating the cost of physical call centres and offering a cloud-based alternative assimilates Talkdesk as the market leader for digital call centres. Talkdesk have an office in San Francisco and a strategic office in their home city of Lisbon. The abundance of local talent moving towards entrepreneurship makes southern Europe an untapped market for hiring the highly demanded software engineer. With the Web Summit moving to Lisbon next year, Fonseca stresses there is more to Portuguese startups than meets the eye.

Out of the interviews I was able to catch, Fonseca of Talkdesk, Ambarish Mitra of Blippar and Wallapop’s Agustin Gomez really stood out for me. Entrepreneurial journeys by all three founders were truly inspiring.

Blippar requires no introduction. Pioneering a visual browser referred as the “Wikipedia of the physical world” is one of many reasons why Blippar should be on your radar. With a valuation of over a billion dollars CEO Mitra confesses unlike other startups Blippar is not for sale.

Wallapop on the other hand a second hand marketplace born in Barcelona is doing wonders with a recent acquisition of ‘Sell It’ in New York. Forthcoming plans include operations in the US. Unconventionally Gomez refused to divulge in Wallapop’s fundraising history. A rare move for a startup but then again is a startup all about fundraising and valuations or is it about truly making a difference?

At TechCrunch Disrupt a new diaspora of startups are coming to surface. Once upon a time a startups dream was acquisition by a larger holding company and for others a publication on their latest funding round was the next best thing (both still are, for some!). However with startups like Blippar and Wallapop manifesting their status quo is a sign of a new generation of startups. A generation I look forward to.

Mevish Aslam
Mevish is the founder and Nomad in Residence at Terminal3.co and Sprinters.co. She empowers remote workers to leave the office cubicle to travel and work from anywhere in the world.
RELATED ARTICLES
Other Stuff

10 of the UK’s fastest growing startups