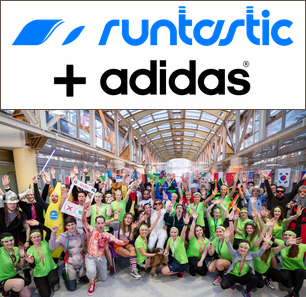 As the logos on the left indicate, I’m talking about the German adidas Group wich just acquired the Austrian startup Runtastic. The Linz-based company, which helps you to track your fitness activities, was founded in 2009. According to TechCrunch, the acquisition deal values Runtastic at €220 million. Before the closing of today’s deal, the largest shareholder in Runtastic was Axel Springer – in the 4th quarter of 2013, the German media giant purchased 50.1% of the company.

Runtastic’s CEO & Co-Founder Florian Gschwandtner announced this just a few hours ago on the companies blog. He stated: “With our new partner, we’ve found the perfect match when it comes to taking our business to the next level and ultimately serving our community members in even better and smarter ways. At Runtastic, we already have a lot of knowledge when it comes to apps and digital technology – and with adidas Group as our trusted counterpart (and one of the most successful and most comprehensive sports companies in the world) there’s nothing we won’t be able to do when it comes to health & fitness offerings.”

He continued: “Runtastic will remain its own entity (within the adidas Group) and continue to operate from our current offices in here in Linz, Austria, Vienna and San Francisco. We will continue deliver further optimizations, unique content and a highly-anticipated new app by the end of the year.”