Hotel Schani: the very first hotel for the geek generation in the CEE region 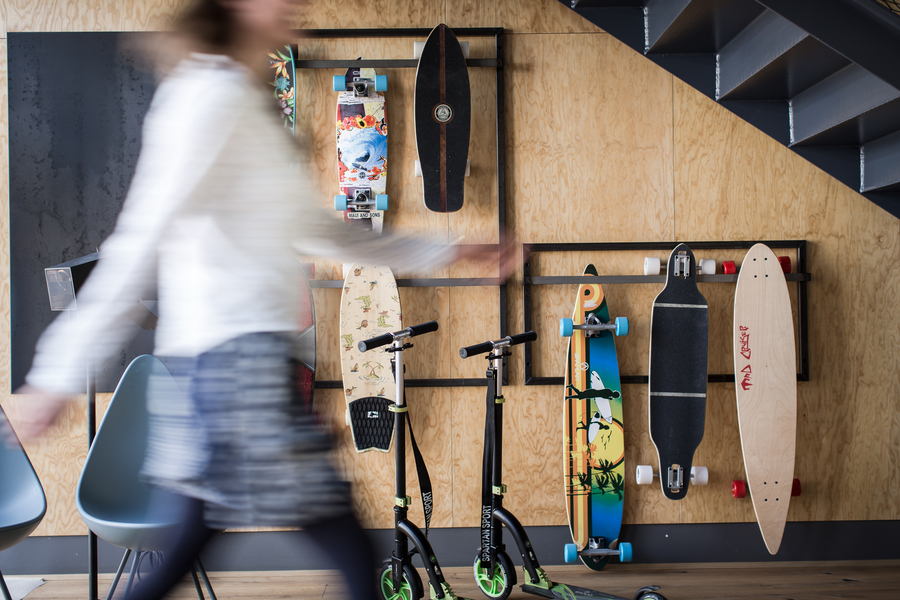 In the beginning of the year, me and my colleagues were actively working on the mission of finding a venue for the Grand Finale of the upcoming Central European Startup Awards in Vienna. That is how we got introduced to Anita Komarek by Kata Klementz, the co-founder of LOFFICE. And not much later we ended up with a great deal with this amazing place. I had a nice coffee with Anita and asked my questions from her in order to show you virtually around in this awesome building. 🙂

Peter: What is the story of the hotel and what do you exactly do?

Anita: I am the PR and Marketing Manager of Hotel Schani, the

second hotel owned by the Komarek family which has been involved into the hotel and tourism business since the 1930s. Their first business was a guesthouse which got rebuilt into a hotel in 1980 by the second generation. Even that hotel was a pioneer one back then, has been providing a purely organic environment to its guests for over 35 years by now.

The third, upcoming generation of the family decided in 2008 to start another revolution; while looking for potential venues, finally in 2012 we found the ideal plot and during the same year, we also met Fraunhofer IAO, an institution that contributed to the final concept of Hotel Schani, based on a guest survey made during the FutureHotel research project, which examined guests’ expectations of the hotel of the future.

Peter: What are the actual innovations in this hotel?

Anita: The outcome of the research was mostly in line with the plans and ideas of the founders, so the cooperation was made, which resulted the individual booking and check-in process, meaning that guests can book rooms online from mobile, can pick the room just like a seat on a flight, and can also check in from mobile when arriving to the venue. Oh, and the virtual key to the door is received to the guests’ mobile, and can be actually used from Hotel Schani’s unique mobile app. And just in case, there is a check-in terminal at the lobby where guests can also get a key card.

Another important innovation that the hotel lobby can be used as a coworking space and we even have a separated room for coworkers. It supports the idea that the local coworkers (who can even register and host their companies on the address of the venue) can also interact with the likeminded guests who are travelling to the city.

Since we mainly focus on digital natives, a 200 MB up and download wireless LAN is available all over the place, and all other possible technological needs can be satisfied – such as enough USB sockets in the rooms and also the lobby, access to printers, scanners and other widgets. We also have an event room that can host events up to 130 people. Oh, and Bitcoin acceptance is in progress.

You can also work from the rooms, where you may connect your gadgets wirelessly to Samsung smart TVs, while working from an ergonomic table, and you may also plan your meetings on a magnetic Vienna map on the wall, moreover, you may rent out a longboard to go for those meetings.

Peter: Where does the name come from?

Anita: ‘Schani’ is a typical Viennese nickname of Johann (Jean in French), and since in the 19th century it was trendy to use French nicknames, especially amongst waiters, a well known Viennese story was created when the employer asks the waiter: “Schani, bring the garden out to the street”, which is the basis of the expression: ‘Schanigarten’. That is well known is Vienna, so we wanted to catch this momentum. We even created a mascot for this, who tries to explain the Viennese expressions to the guests.

Working together with Archisphere we created an interior that strives to make people feel even subconsciously: they are in Vienna. The face of the hotel looks like a famous Thonet chair, which is the representation of the café culture of Vienna in the 19th century.

As there was no bathrooms or restrooms inside the apartments back then, ‘Basena’ was an important meeting point for the tenants within the blocks of houses. We also have one at the lobby, where guest can drink the high quality water coming directly from the Alps, from tap.

And finally: the venue is located right next to Hauptbahnhof, aka the Central Train Station in Vienna, which is the “newest” part of the city where buildings have been growing up from the ground just recently.

Peter: Thank you very much for your time and all the best to this amazing project!

Peter Kovacs
Peter Kovacs is the Co-Founder of Global Startup Awards, xLabs and IseeQ . He contributes to EU-Startups with founder interviews and stories, mostly from the CEE region.
RELATED ARTICLES
Austria-Startups